Speculation mounts over cause of bridge collapse in Genoa 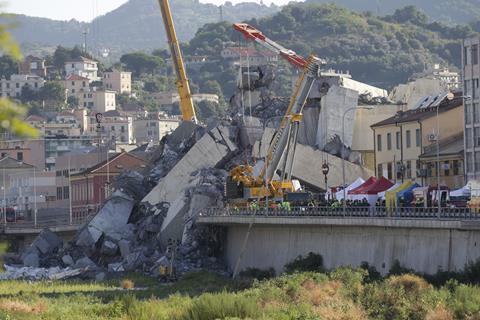 The extent of the damage after a major motorway bridge collapsed near the Italian City of Genoa on Tuesday morning, killing and injuring numerous people

In Italy 39 people have died after a 200m section of a motorway bridge in Genoa collapsed, leaving cars and trucks to tumble 45m onto concrete and railroad below.

Work is still ongoing to try to find survivors in the wreckage, but rescuers say there is now little hope of finding more people alive.

While the cause of the collapse is not yet know, there is mounting speculation that its original design and construction is to blame and that further maintenance work could have played a part.

The bridge is used by 25 million vehicles a year, as it forms part of a major highway linking Italy to France. While projects such as bridge are expected to have a lifespan of at least 100 years, the pressure of heavy traffic may have played a role.

Work to shore up the bridge’s foundation had been ongoing when the bridge fell apart yesterday. So another option is that the maintenance work had somehow left the bridge exposed to an excessive load.

Some experts have also said the engineer behind the project, Riccardo Morandi, failed to foresee the way in which concrete age. Antonio Brencich, a structural engineer and lecturer at Genoa University said in 2016: “there are errors in this bridge. Sooner or later, it will have to be replaced. I don’t know when.”

His comments, which were published in the Italian media at the time, included the observation that “right away, the bridge manifested various problems beyond the [over budget] construction costs.”

Yet another possibility is that the bridge was never built properly or has had dangerous repair jobs. The mafia is known to have infiltrated Italian cement and reconstruction companies, and could be behind a sub-standard job on the bridge. Rumours have been reported that the mafia may have altered altered the concrete mix, reducing the amount of cement content to cut costs - but to the detriment of load-bearing capacity.

Steel work corrosion is perhaps a more likely culprit and could have undermined the structural integrity of the bridge.

The Italian transport minister has called for the bridge’s maintenance company, Autostrade per L’Italia, to be fined and for its operational licence to be removed. The company has said it monitored the bridge each quarter according to its contractual oblibations.