Buckingham is set to start work at the end of this season on a new stand for Premier League strugglers Fulham.

The Cottagers, who are one place off the bottom, will play the next two seasons at Craven Cottage with just three stands while Buckingham carries out work on the Riverside Stand (pictured below).

Buckingham, which carried out work on the roof of the new Spurs stadium and also built Brighton & Hove Albion’s new ground, beat Sir Robert McAlpine to the deal which has an overall redevelopment value of £100m.

It is expected to take two years to complete and will be finished in time for the start of the 2021/22 season.

Designed by Populous, the architect behind the new Spurs ground, QS on the scheme is Core Five.

The new stand will include a river wall and a new public riverside walk.

Craven Cottage has been home to Fulham, whose relegation worries increased yesterday after a 2-1 home defeat to Spurs, since 1895. 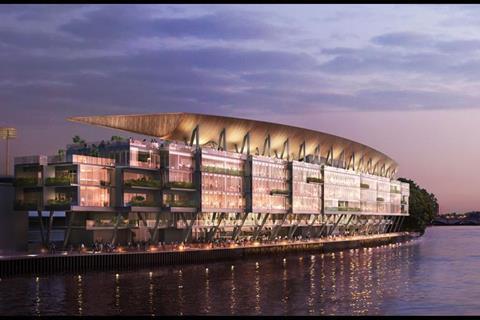