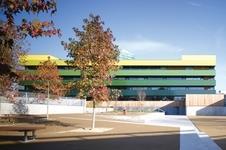 The bookies are dreading an Allford Hall Monaghan Morris victory in this weekend’s Stirling Prize, with Paddy Power predicting a "four figure loser” if Westminster Academy takes the gong.

The Irish bookmaker slashed its odds on AHMM from 12/1 to 4/1 in recent weeks, and a spokesperson said a win for the firm could lose them thousands of pounds.

He said: “The big mover in the market was the Westminster Academy, cut from an opening 12/1 and bet at various prices down to its closing price of 4/1. It would also be a four figure loser for us, so the result we are fearing.”

The closing odds from both firms were:

Both firms have now finished taking bets on this year’s prize. The winner will be announced at a dinner in Liverpool on Saturday evening hosted by the RIBA.