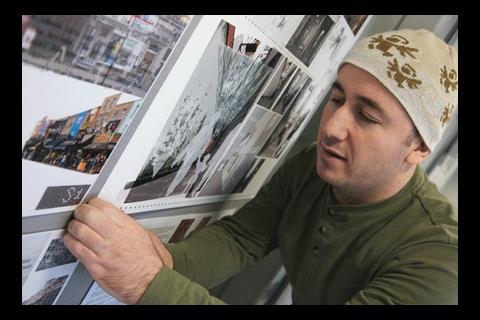 Heimn Abdullah, one of five directors for Company 1, looking at the Upper Parliament Street, Angel Row and Hurts Yard areas of the city 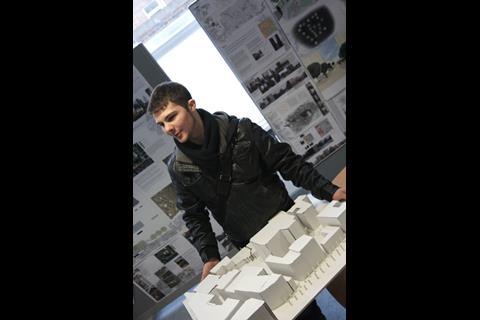 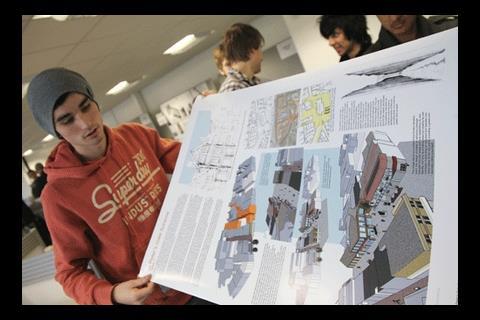 Thomas Summerfield, a member of Company 5, looking at the St Peters Gate and Exchange Walk areas of the city

Around 200 students from Nottingham Trent University’s School of Architecture, Design and the Built Environment have participated in a scheme to develop ideas for the regeneration of Nottingham city centre.

The architecture, architectural technology, landscape and design students have made suggestions to a board that included Nottingham City Council and local planners and designers on how some streets, alleyways and associated buildings in the city centre could be better developed.

The scheme was a collaboration with Nottingham City Council as part of the university department’s annual ’project week’ in February.

Originally, the idea was to focus on the historic alleyways and arcades, but this was widened to include streets and squares, particularly where the alleyways emerged. Consequently, they could look at buildings, spaces, roads and landscape features.

Their first task was to try to establish what was already there; to review the quality and value of the environment within their own areas. In total five areas were identified in conjunction with the planners.

Through this analysis the students were challenged to see what ideas they could come up with to make short-term and longer-term proposals. This could range from a new tree to demolition of buildings. The teams surveyed and evaluated a number of areas and came up with ideas that were realistic and achievable.

Gavin Tunstall, programme leader in Architectural Technology at the university, says some of the ideas could work also as short-term solutions.He believes the current economic climate may have put a hold on some of the longer term regeneration proposals, but adds: “we hope the board will take some of the ideas with them.”

• Demolition of buildings or part buildings to widen access or create new spaces
• Re-landscaping existing squares to create opportunities for new activity
• Creation of new through routes linking streets and alleyways together
• Introduction of murals
• Introduction of green walls and roofs
• New street lighting and floodlighting schemes
• New glass lifts at some changes of level
• Change of use to some areas to introduce activity
• Development of some focal point buildings as better landmarks
• Repaving areas, particularly to indicate flow patterns

As many as 95% of the students participated in the scheme.

“This year is particularly poignant given the impact the current recession is having on the retail outlets in the city centre.Many shop units are now empty and proposed redevelopment and refurbishment plans are being put on hold or maybe postponed indefinitely,” Tunstall says.

The project was so timely that a couple of ex-chief planning officers turned up at the exhibition, together with the planner currently reponsible for the city’s urban design guide.

For more information visit Nottingham Trent University.
Sign up for the Student Newsletter at Building.