Sweett brand to disappear within two months of takeover 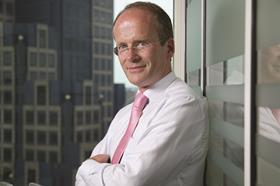 The historic Sweett brand will be dropped within two months of the consultant’s takeover by Currie & Brown, the buying firm’s chief executive Euan McEwan has told Building.

McEwan (pictured) was speaking ahead of his Middle East-owned firm’s £29m offer for Sweett Group going “unconditional” on Tuesday, after it purchased 89% of its shares, taking it over the 75% threshold needed to seal the deal.

The takeover is set to complete next month and will de-list Sweett from the AIM arm of the London Stock Exchange after nine years. The takeover – which will create a combined company of over 2,000 employees – ends nearly 90 years of independence at Sweett.

McEwan said Currie & Brown will move swifty to end the Sweett brand as “you can’t have two names in the same marketplace”.

He said the firm was attracted to the deal by “Sweett’s team and their strength in the UK”.

McEwan described the acquisition as a “vote of confidence” in the UK by its parent company, Middle East-based Dar Group, post-EU referendum. The firm’s £29m offer for Sweett was first announced on 24 June, the day the UK’s decision to vote for Brexit was announced and the country lost its prime minister.

McEwan said: “Dar is very positive about the UK […] You get on with it. There will be opportunities coming out of Brexit.”

McEwan said he expected further major M&A deals within construction consultancy and for the market to reduce to a “big four or five players”, like in accountancy.

He said: “I’m an accountant as well as an engineer and we went through this in the mid-1980s. It makes sense to consolidate to match up services with clients around the world.”

He said Currie & Brown’s strategy was primarily to “continue to grow organically” but further M&A “might be” part of the picture.

Sweett’s board of directors - including chief executive Douglas McCormick - will step down once the deal completes.

Currie & Brown had already acquired Sweett’s struggling Asia Pacific businesses in a deal agreed late last year and concluded in June. This purchase had been delayed by a disagreement between the two parties over the impact of currency fluctuations on the takeover price, which was resolved after a decision from an independent arbitration.

Currie & Brown has said it believes cost savings can be made at Sweett, principally through de-listing and cutbacks in property, back office and shared services.