Swimming in the Thames? 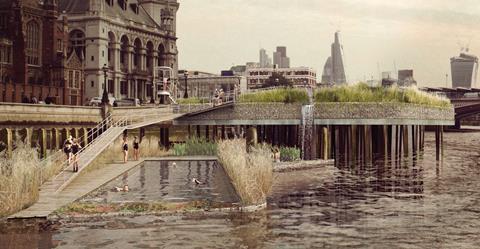 The designs, part of a project aimed at working up new visions for London and the Thames, is a partnership between Studio Octopi, Civic Engineers, and Jonathan Cook Landscape Architects.

The team say swimming could return to the Thames upon completion of the £4bn Thames Tideway Tunnel sewer project in the next decade, which will remove 96% of the sewerage currently entering the river.

In the late 19th century, upon completion of Sir Joseph Baselgette’s sewer system, there were floating baths in the Thames at Charing Cross nad swimming in the river was a common occurrence.

In 1878 Agnes Beckwith, at the time hailed as “the greatest lady swimmer in the world” safely swam 20 miles from Richmond to Westminster and back again.

The London As It Could Be Now project is being developed by The Architecture Foundation with Rogers Stirk Harbour + Partners and the Royal Academy of Arts.

The Thames Baths Project design team says the project “looks to re-establish an intimate and playful link between Londoners and the historic lifeblood of the city, the River Thames.

“Here is an opportunity for Londoner’s to reclaim ownership of their largest outdoor public space.”