Patricia Moore joined consultant back in 1999 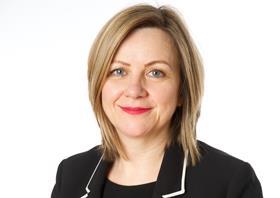 The move will also see Moore, who will be the first female boss of T&T’s UK operation, take a seat on the firm’s executive board.

She joined the consultant in 1999 and was appointed as managing director of its UK infrastructure business nearly three years ago.

Moore will lead a team of 2,000 people and said she was “delighted to be appointed to this role at a time when our UK business is delivering some of the most complex and transformational programmes across the built environment”.

Schemes she was worked on at the firm have included the HS2 and Crossrail rail schemes along with the planned Hinkley Point C nuclear power station.

T&T chairman and chief executive Vincent Clancy said: “The UK managing director role will allow Patricia to bring her experience and insight to the whole UK business and help us to unlock further growth.”

Moore began her career in Scotland in 1988 as a trainee QS before moving to London six years later where she worked on the Jubilee Line Extension and the refurbishment of Paddington Station.