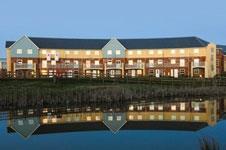 The appointment of Christopher Rickard as the new finance director of Taylor Wimpey has increased the likelihood of a refinancing deal before Christmas, according to sources close to the talks between the housebuilder and its lenders.

Earlier this month the company said talks would extend into next year as a result of involving bondholders in discussions, who are owed £450m of its overall £1.7bn debt.

It has previously failed to hit a series of deadlines this year.

But one source said a deal was now a possibility this side of Christmas because Rickard’s appointment had sent a strong message to Taylor Wimpey’s lenders. “He has significant experience of the banking and capital markets and is very well equipped to deal with the challenges that lay ahead. Together with the recapitalisation of the banks, this was the catalyst the Taylor Wimpey talks had been waiting for. A deal is now likely sooner rather than later.”

Rickard, 51, most recently held the position of finance director at technology company Whatman Group, leaving the business when it was sold to GE Healthcare in April 2008.

He takes over from Peter Johnson, who announced his intention to step down in July.

Pete Redfern, chief executive of Taylor Wimpey, said: “I'm extremely pleased that we have secured a finance director of Chris' calibre to join our executive team. As an experienced finance director with relevant industrial experience, Chris will add strongly to the operational effectiveness of the company and the overall development of our business."