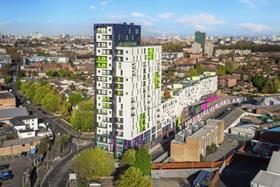 Shares in Telford Homes were clawing back some of the losses they experienced yesterday after the Waltham Cross-based housebuilder warned that delays to a series of jobs in London would see pre-tax profit for 2020 come in “significantly below” the £40m it was forecasting for this year.

The AIM-listed group’s stock fell by 20% yesterday after it issued a trading update in which it said planning delays on a number of developments, notably the LEB Building in Bethnal Green, east London, would result in profit hitting the books later than expected.

Another headache was seeing construction work at the City North mixed-use development in Finsbury Park, north London, being held up for six months “due to matters outside of our control” around dealing with transport bodies and the need to coincide with work done by other firms.

This would move £15m of profit into the 2021 financial year, the company said.

These factors, combined with the impact of lower margins across its build-to-rent business, would see profit in 2020 significantly below 2019’s. After 2020’s close total profits would rise again but Telford again warned that this would be with lower overall margins.

As for the 12 months to 31 March 2019, Telford said profitability was being affected by a tough London market. Two build contracts that had been pegged to be completed by now would now not be finished until the next financial year, shunting £5m of profit out of the current trading year.

Telford’s shares were trading at 290p, 4% higher than yesterday’s close of 279p.

The company recently sold a site in east London it bought two years ago to a joint venture which includes US rental housing specialist Greystar for £105.5m.