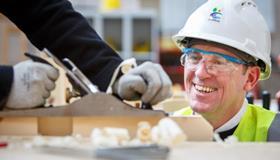 Fear of the unknown was one of the biggest causes of concern for Carillion’s apprentices in the wake of the construction giant’s collapse, according to one trainee.

Jordan Barnes, 18, has been working as a second year carpentry apprentice for Carillion in Birmingham and said he’d been caught off-guard by the company going into liquidation.

“I was already at work on the Monday morning and one of the lads got a call from someone working on a different site and then he mentioned me and said Carillion had gone under,” Barnes said.

“I was at work at the time. I thought ‘I don’t know what to do now, am I getting paid for this or should I go home and look for another job?’

“It was out of the blue because there was a lot of talk that the government or the banks would bail Carillion out so we weren’t really that worried. We thought it would all be alright.”

Barnes said, while it had been a shock, he was sure those in charge had pulled out all the stops to try and save the company as it crumbled in its dying days.

He said: “If they could have prevented it they would have. I didn’t feel let down, more worried. I didn’t know what I’d be doing. I didn’t know if I’d have to find alternative employment or what.”

Barnes, who will continue his apprenticeship with CITB and his current work experience provider that was organised through Carillion, met with the training body late last week.

He said while his position had been clarified, the instability was worse for those apprentices in the initial stages of qualification.

“We’ve already got everything sorted out. We’ve got work experience providers, we’ve got job line up at the end of the apprenticeship as well so for us it’s alright. But for some of the level one apprentices who don’t actually know that much about what the course entails yet because they’ve only been on it for a month or so they might struggle a bit.”

CITB said it would make providing support to Carillion’s 1,400 apprentices a priority when news of the contractor’s liquidation broke last Monday.

The training body has put out a plea for construction firms to step up and take on former Carillion apprentices.