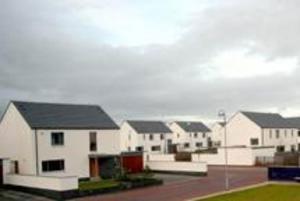 From little acorns grow tall trees. Those who have worked on the Woodfields 'Generation Homes' project are hopeful that this principle will take hold in their ambition to tackle the massive challenge of tackling the UK's existing, and inefficient, housing stock. The Woodfields project, part of the Generation Homes programme, has seen a range of energy efficiency and renewable energy measures introduced to three 3-bed semi-detached houses and three 2-bed bungalows on a rural cul-de-sac in Woodfields, Hampshire. The team behind it want to take this to a much large scale.

Cathy Hough, senior consultant at ESD, who worked on the project with Drum Housing Association, has described the Woodfields ‘Generation Homes’ project as an early test of a key Radical Energy Refurbishment scheme; the next stage being the renovation of whole streets – groups of up to 100 houses. She tells how limited funding is hampering the larger scale roll out of this project but that support is currently being sourced. The initial project was funded by an Energy Saving Trust, Innovation Programme grant, an initiative which has now ended.

Hough hopes that the project will kick-start the market for this type of renovation as currently there is no supply chain for such developments; project managers struggle to find installers as this kind of innovation is not yet part of the industry, she says.

There are 4 million social houses in England and as these are controlled in large groups by housing associations, it is easier to reach the volume of houses needed for a larger-scale roll out of the carbon efficiency renovations. In comparison, Hough raises the issue of owner-occupied properties where it proves much more difficult to organise such renovations en masse. She hopes that the Generation Homes project, once undertaken on a larger-scale in social housing will have a positive knock on effect in the owner-occupied market.

Implemented by Drum and ESD, the project targeted heat losses through the building fabric; the reduction of energy use; and the offset of residual energy demand through the use of renewables.

Paul Ciniglio, sustainability and innovation manager for Radian Group, of which Drum is part of, says: “We spoke to residents and they were keen to take part in the upgrade, primarily because their coal fired heating was expensive and inconvenient. They immediately saw the cost advantages of the new technologies and I like to think that most of them saw the environmental benefits too.”

In addition, ground source heat pumps (GSHP) and photovoltaic panels have been installed. These renewable energy sources replace the solid fuel fired boilers and electrical storage heaters previously installed because there was no mains gas supply.

The GSHPs supply the total heating and hot water demand for each house: 3.5kW systems have been installed in the bungalows and 5kW in the houses. “These were the only part of the installation that we had problems with,” says Ciniglio. “The boreholes kept collapsing due to the wet sand strata deep below ground, so we had to put in two 40m deep bores instead of one 80m deep for each property.” The GSHP plant is housed externally in a weatherproof box.

Each house was also equipped with a roof-mounted array of 1kWp photovoltaic panels. The system generates DC electricity that is converted into AC current to power lighting, appliances and the heat pump. Up to 800kWh will be generated per annum and some residents have chosen to have export meters installed, to sell energy to the Grid.

Waste water heat recovery was another innovation new to the residents. Able to recover 60% of heat still embodied in waste water as it goes down the drain, the Power-pipe is a copper down pipe encased in a coil of thin copper tubing. When waste water runs down the large pipe it transfers heat through the copper walls and into cold water circulating in the small diameter tubing. This preheated water supply is fed back to the shower, considerably reducing water heating requirements.

“Residents were intrigued by some of the new technology,” says Ciniglio. “We briefed them before installations began and provided an information/instruction guide. Then, when work was complete, we went back and gave face-to-face instruction on things like the heating operation.”

Woodfields has been developed as an exemplar low-carbon refurbishment project and as such costs are high due to the extensive amount of equipment installed. The total project value reached almost £150,000. Funding was sourced from the Housing Association, Generation Homes and a Low Carbon Buildings grant for the PV installation.

The homes are to be monitored for the foreseeable future: meters have been installed on the GSHP, Solar PV array and the waste water heat recovery. Electricity use is also being monitored, as are the internal and external temperatures. Additionally, a pressure test was carried out resulting in 4.5 m3/m2/h for the bungalows and 5.5 m3/m2/h for the houses; well below the Building Regulations requirement of 10 m3/m2/h. Early figures estimate that carbon emissions are expected to be 2.5 tCO2/year, dropping from 9.8 tCO2/year before the upgrade.

“The monitoring results are eagerly anticipated by us and the residents,” says Ciniglio. “We are putting together a report soon and there will be further updates over the next few years.”

The transfer of social housing from Councils to Housing Associations has created an enormous release of funds, with much higher investment in maintenance. However, renovation work is often done on a piecemeal basis, this being something that ESD and their partners are campaigning against. ESD say that social housing occupants in particular prefer one large-scale renovation than lots of individual staged changes. They advocate greater investment in large scale renovations which start early rather than localised upgrades leading up to the Government carbon emissions benchmark of a reduction of 60% by 2016.

Home energy use accounts for 27% of the UK's carbon emissions, and, while new homes are subjected to all kinds of energy efficiency measures, the existing housing stock still makes up 90% of total housing in the country. This small but exciting project to upgrade 1950s homes provides a straight forward blueprint for many more existing properties. What’s required now is government backing to begin a nationwide upgrade.