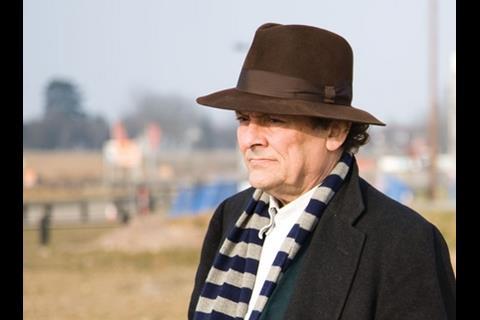 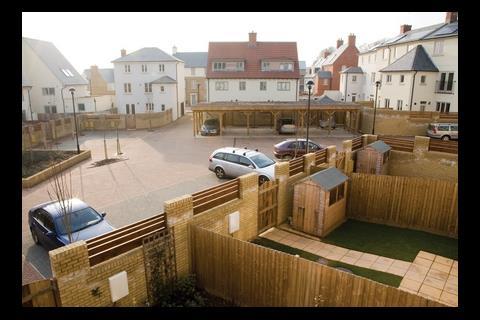 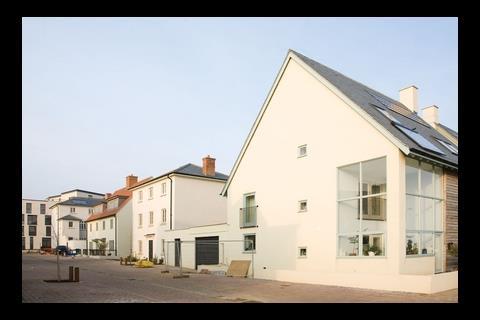 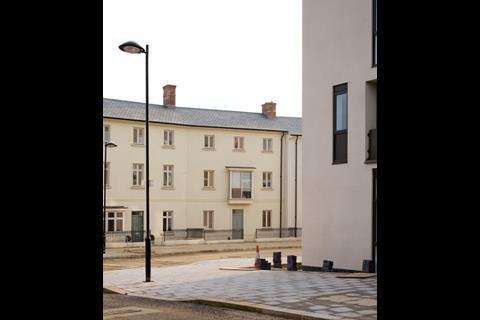 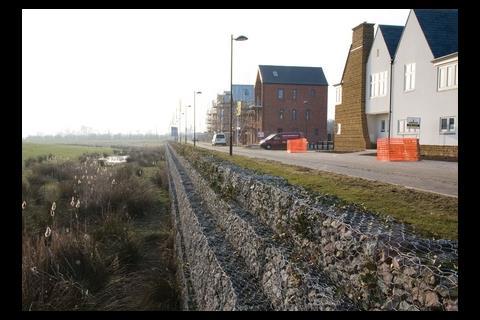 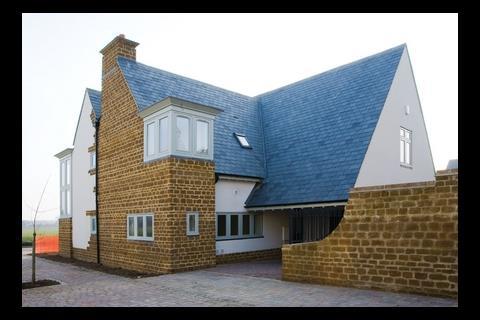 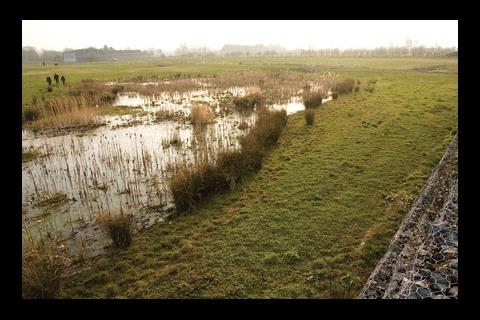 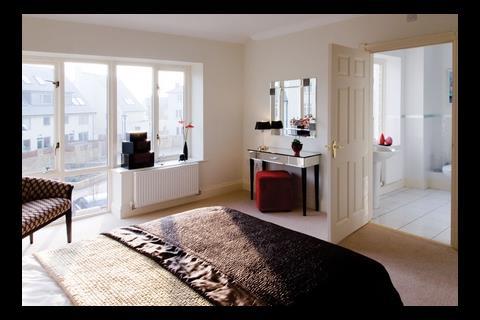 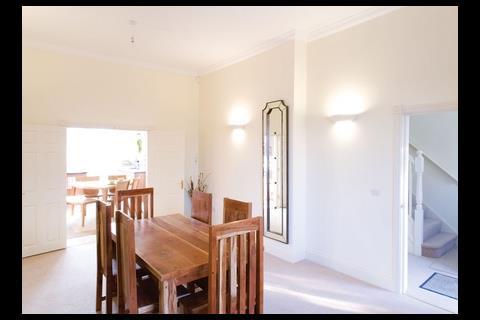 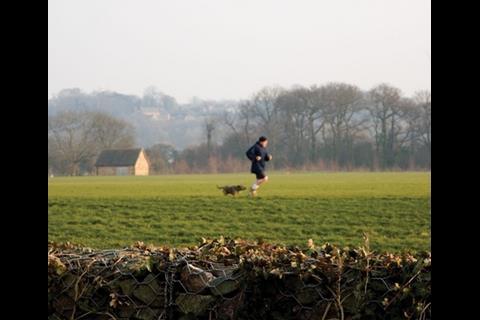 In the first of a series of reviews of important housing developments, Gus Alexander looks at English Partnerships’ remarkable scheme in Upton, Northamptonshire, which is built on a bit of a marsh …

All sorts of claims have been made about Upton, the flagship urban extension to Northampton started in 2003. English Partnerships (EP), which supplied the land, said it would set “new standards locally and act as a template for developments nationally”.

Prospective developers had to sign up to a set of design guides when submitting their detailed planning applications, and the whole development was based on a groundbreaking set of environmental enabling works that were carried out before the individual plots were sold. All in all, a “new generation” of housing development was promised. Last week, Building sent me up to Northampton to see if the first 300 homes lived up to the hype.

The central proposition at Upton was that Northampton needed some more housing and the obvious place to put it was a 42ha site about two miles outside the city centre. Ultimately, the total number of dwellings will be just short of 1,400 and the scheme is scheduled for completion in 2010. A thousand dwellings now have planning consent, 320 have been built, and the first residents moved in two years ago.

It has not been plain sailing. The land in question suffered from a number of shortcomings, the principal being flood risk. Therefore the local authority, advised by the Environment Agency, didn’t really want to encourage anyone to build there unless there were special remedial action to deal with water levels; by the same token, housing developers were reluctant to build anything there because the infrastructural costs were such an unknown quantity.

Building on brownfield or, in this case, wetfield sites is very well in principle and is a worthy, green and sustainable objective. However, it’s one thing to factor in the cost of providing hammerhead turning circles to suit the council’s dustbin lorries and quite another to provide a micromanagement system that can deal with rising water levels well enough to reassure insurance companies.

This is where EP took charge. It set up what was effectively a schedule of accommodation, as well as a design guide for would-be developers. In return, to make it attractive to developers, it dealt with the shortcomings of the site. Typically, this means dealing with slag heaps, or other toxic land pollution, or the detritus of former industrial activities such as mining or smelting. In this case it meant solving the flooding issue. So what did it turn out like?

Well, there are all sorts of encouraging aspects of the Upton development. First, it hasn’t all been built by one builder, for one developer, for one user group. Second, the buildings don’t all look the same, or as though they’ve been designed by the same architect, or lifted off standard plans, so there is a good deal of visual variety. Third, and most important, it hasn’t been designed to suit borough engineers and pander to their obsession with tarmac and turning circles.

Part of this variety has been provided by the way the flooding problem has been dealt with. EP has laid out a grid of water treatment channels that reminds me of street layouts anywhere the Dutch have been involved. These are not so much canals as those Japanese gardens that blend ditches or marsh habitat.

We were shown round by Erica Davies, a long-term project manager at EP, who was rather embarrassed at the levels of water in some of the channels. “It’s not supposed to be there,” she said. “It’s supposed to just be mossy and green,” as indeed most of them were. This sustainable urban drainage

system (SUDS) is the key environmental feature of Upton. These are so obviously watercourses (complete with pedestrian bridges over and culverts under them), that it doesn’t seem to matter if they have water in them or not. It is not a cheaper system than underground pipes, but it is a much more visible feature – and the bio-diversity it creates softens the effect of the high density dwellings. The £24m infrastructure costs have more or less been recovered already.

We were joined by Tom Hustler, also of EP, whose remit seemed to be to tame nightmare sites over the whole of the north of England. Both of them had become so used to the idea of a housing development laid out along a grid of overflow ditches that they seemed to barely notice them. But to a first-time visitor they are a central part of this new suburb’s atmosphere. The dwellings largely take the form of terraced houses, although I cannot remember when I last saw a speculative development that contained four-storey terraces of single family dwellings. The dwellings are what is known as “tenant blind” so it is not possible to identify which are social housing.

There is plenty of variety in the housing, which are mostly three-storey terraces.

There are some blocks of flats, although no free-standing houses. Most take the form of “traditional“ buildings, and not just estate agent “traditional”, with features that look like sash windows with real glazing bars, but with PVCu tilt-n-turns, and pitched rather than flat, roofs. They are traditional, in the sense that they have been built using traditional materials (clay brick walls that look as though they are 330mm thick, for instance, and painted render, stonework, natural slate and tile roofs). The houses are laid out in terraces and streets connected with low-key “mews” housing. Unlike most housing developments there are no garages. Private parking is provided in a series of courtyards, sometimes covered, sometimes not. These courtyards are gated, a feature I find unfortunate, although once residents have settled down, they may not be encased in steel barriers to the extent they are now.

EP has taken great care with what it calls a “home zone” attitude to traffic, and it is surprising how much of a community feel there is when the whole place is not festooned with signs, directions, instructions, yellow lines and the rest of the everyday apparatus of institutional control. Indeed, some parts of the development (the linking mews houses) go so far as to hardly have curbs at all. This is all admirable – although we have a long way to go before we are up to Dutch and German standards; in those countries, cars are more or less prohibited from pedestrian developments.

Although some dwellings share a boiler plant and there are solar collectors on view, we are nothing like as sophisticated as the Scandinavians who insist developers plug into centralised waste management, heat recovery, and grey water recycling systems.

There has been so much public interest in Upton in the past few months that as I was not HRH himself on a visit, we were expressly forbidden from waylaying residents, sticking our heads into their kitchens or asking them what they thought about living in a development determined by the layout of drainage ditches.

But there is plenty of evidence that people feel they belong. The playground is being used, the school seems like a natural part of the environment, and even though the shops have come on stream, the atmosphere is one of optimism and participation. Some houses have been designed so the ground floor ceiling height is suitable for commercial use, and although these are laid out as residential accommodation, they could easily be adapted.

The aim of a development with a high sustainability remit is that its residents barely need to travel and the big attraction of a busy town is that activities go on simultaneously. The test at Upton (and other schemes like it) will be to see whether it feels different from others once the commercial elements come alive.

Compared with the standard of most speculative housing development Upton is encouraging. However, if the government wants a quarter of a million new houses every year, that means 240 developments this size. In terms of density, the space devoted to cars, the attention to a green agenda, and the adherence to an overtly retro-traditional appearance we still have a long way to go.