The international surprises of the World Architecture Festival 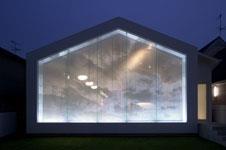 From chapels to car parks, the UK has a lot to learn from the ideas of small architects abroad

One of the defining features of the World Architecture Festival has been the number of quality projects by small architects little known in the UK. Here are four which stood out from the shortlisted categories.

In the Religion and Contemplation category, I particularly enjoyed the Estancia Chapel, designed by Bunker Arquitectura. The “Crystal Chapel” was their first completed project, a chapel for weddings in the grounds of a public garden near Mexico City. Surrounded by jacaranda trees, this concise forml was built in just four months for the princely sum of $140,000 (£86,500). The architect, Esteban Suarez, told judges he was so inspired by the construction of the building that he asked his girlfriend to marry him. The two were wed in the chapel itself on the day after it opened. Now if that doesn't win him the prize I don't know what will.

The Health category brought up a couple of surprises too. Lyons Architects´ retirement home in Australia is something very different from your average run-down Worthing funeral-home-in-waiting. With its timber lining and mix of autumnal colours, it looks more like an upmarket hotel than an old folks´home. More than 50% of the UK population will be over 60 in fifteen years' time, so we´re going to need some quality retirement accommodation. This is an excellent place to start.

Also in the Health category was the Hirose Dental Clinic, a building in Tokyo designed by Eleven Nine Interior Design Office. You could almost imagine a Haruki Murakami novel being set here, white, crisp and eerie in its scarcity. The clouds on the misted glass may be a tadh too touchy-feely (I'm reminded of the Saatchi & Saatchi boardroom that supposedly had clouds painted onto the roof to promote “blue sky thinking”. I'm not making this up), but can you imagine a dentist's surgery like this in the UK? That kind of thinking just doesn't exist.

Last, but not least, is Moore Ruble Yudell's Santa Monica Civic Centre Parking Structure. Yes, it's a car-park. I know architects like Wilkinson Eyre have made great strides in designing utilitarian car parks that branch off from the brutalist, but this is in another league. It looks more like a discotheque than a car-park, a slice of neon Miami transplanted into an LA suburb.

All of these buildings are fairly ordinary commissions made into something creative and new by the ingenuity of their architects and the boldness of their clients. If only more of our buildings were like that.