Output likely to fall more than previously thought, according to analysis

The outlook for the construction sector over the next three years is gloomier than previously thought, according to exclusive analysis by Hewes and Associates.

The largest dips are forecast for public sector work, which is set to reach its nadir in 2012, when output is forecast to dip by over 20%

“Public spending is about to be scaled back,” said the authors of the report. “A more than offsetting improvement in private sector activity is hoped for, although with households still heavily indebted, monetary policy unable to help and real wage growth in decline, the chances of that appear slim.”

The figures do contain some cause for hope, however. Industrial output is one of the areas that is expected to grow over the period. The analysts predict an increase in output for the sector of 6.2% this year and 4.1% in the two subsequent years.

“If we look at the eighties we had large amounts of North Sea oil, in the nineties we had the upside of cheap imports as a result of globalisation.

“So far the projections for growth have been optimistic and the forecasts for inflation have been overstated - that will fade.” 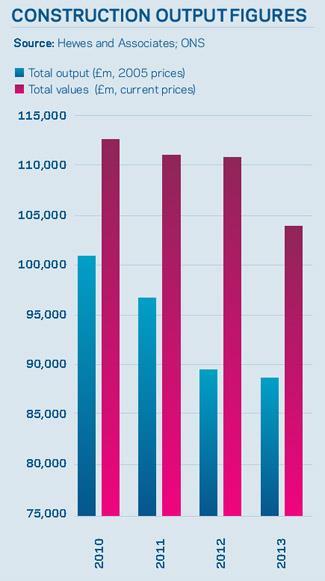