Nearly half of a £180m government fund for new homes has gone to the UK’s four biggest housebuilders.

Under the scheme, first-time buyers will be able to obtain a loan worth 20% of the price of a home. The loan will be jointly funded by the HCA and the housebuilder.

A buyer would repay the loan when they sold the property, and the lenders would take their share of the rise or fall in the value. It is hoped that the scheme will assist about 10,500 buyers.

The first properties are expected to be on sale in September. All the homes must be completed before December 2012.

The scheme was announced in the Budget in March as a way of helping buyers who are struggling to raise deposits and increasing the supply of new homes. Buyers must earn less than £60,000 to participate.

The 10 largest allocations went to national housebuilders including Berkeley and Bovis, and in eleventh place is regional firm Morris Homes with £2.7m.

More than 100 contractors and housing associations will take part, while more than 124 submitted bids.

Pat Ritchie, chief executive of the HCA, said: “Thanks to FirstBuy, nearly 10,500 first-time buyers will be able to realise the dream of owning their home, while housebuilders will
benefit from an additional source of sales. We had an excellent response - including from smaller local builders.” 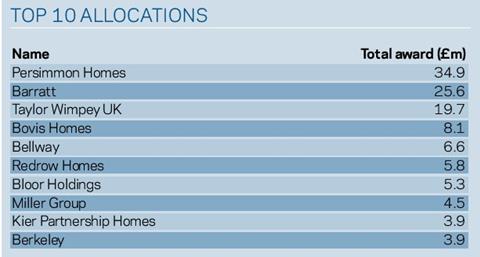