One of London’s most influential politicians has pledged her support to off-site manufacturing as a means to ramp up housebuilding and tackle the capital’s housing crisis.

With thousands of people in temporary accommodation across London, Gavron said the need for well-built, affordable and energy-efficient homes was more pressing than ever, and off-site manufactured accommodation could play an important role in responding to the problem.

Mayor Sadiq Khan was determined to cut the ‘Gordian Knot’ of London’s housing problems, Gavron said, and citing the Rogers Stirk + Harbour-designed development of 24 temporary dwellings (pictured, below) in Ladywell, South-east London, she argued that off-site housing could be built to a very high standard, help reduce energy bills for those living in such units, and drastically cut construction costs.

While she said off-site would be “good for London”, she said the capital was lagging behind other regions in the UK, while barriers to progress included the negative perception of what many still regarded as ‘prefab housing’ and what she called a “lack of continuity of demand”. 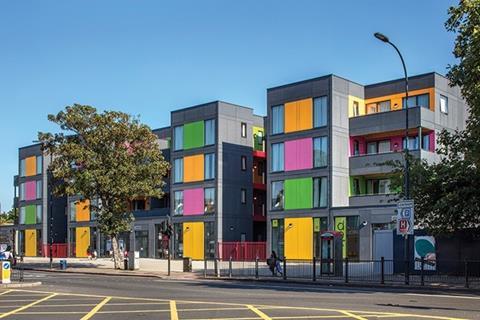 Gavron said the development of off-site factories were important. “Councils and developers could have ‘pop-up’ factories, for example located by the River Thames,” although she acknowledged it was more likely that such production facilities would be built elsewhere.

She added that everyone needed to be thinking and building smarter. “We need a change of mindset. We need to be learning from other industries, and seeing leadership at every level. There also needs to be greater collaboration, both within industry and between industry and the mayor.” Gavron wondered if a solution might be the mayor “stepping in a supporting factories to keep them going”.

Another speaker at the event, Swan Housing Group development director Andy Gatrell said mayoral support would be welcome, since there were not many factories in production “for good reasons”, including set-up costs and overall risk to the venture.

“Grants, financial incentives or provision of land for factories would be good,” said Gatrell, whose company will shortly be shipping out 300 completed housing units a year from its new factory in Basildon, Essex.

Members of the audience, drawn from developers, architects and local government, said they welcomed the GLA’s support for off-site manufacture, but some warned that imposing new regulations would not be helpful.

There were also audience concerns over the availability of mortgages for such housing that was built for sale, the risk of suppliers going bust before projects were completed, and the adaptability and longevity of off-site manufactured homes.