Exclusive: Race for job to build £65m riverside hotel adjacent to the O2 arena in Greenwich has been narrowed down to two bidders 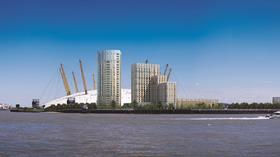 The race to build a £65m riverside hotel adjacent to the O2 arena in Greenwich has been narrowed down to two bidders – McAleer & Rushe and Balfour Beatty subsidiary Mansell.

Building understands a winner will be announced imminently, after a number of other bidders including Sisk were knocked out of the running.

The Lifschutz Davidson Sandilands-designed scheme will comprise two buildings: one with a 452-bed hotel, 30,000 sq ft of conference space, and a 3,000-capacity ballroom, and the other with 100 private serviced flats.

An industry source said the change in ownership “shouldn’t have an effect” on the plans.

AEG began searching for a contractor last summer, prompted by a £500m investment in June by Hong Kong investor Knight Dragon in the wider Greenwich Peninsula scheme, which it will jointly develop with Quintain Estates.

The hotel won planning approval in 2010.