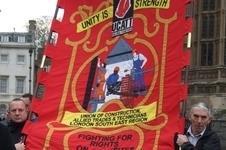 Ucatt today launched its postcard campaign to overturn the Law Lords decision to end compensation for people will pleural plaques.

The union gathered outside the Ministry of Justice with a giant postcard, along with Labour MPs and people who have the scarring of the lungs caused by exposure to asbestos.

Ucatt is issuing 100,000 postcards addressed to justice minister Jack Straw in an attempt to overturn the ruling.

Last October Law Lords ruled to end compensation for people with pleural plaques. Ucatt said the ruling would save insurance companies over £1 billion in compensation payments. The Scottish Executive has indicated it will overturn the ban.