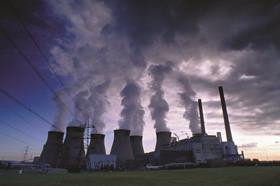 The government has announced plans to close all coal-fired power stations within a decade, ahead of a speech by energy secretary Amber Rudd later today in which she is expected to put energy security rather than tackling climate change as her main policy goal.

Rudd will say all unabated coal-fired power stations will close by 2025, and their use will be restricted by 2023.

In an extract of her speech published this morning, Rudd says: “Energy security comes first and I am determined to ensure that the UK has secure, affordable, and clean energy supplies that hardworking families and businesses can rely on now and in the future.

“We are tackling a legacy of underinvestment and ageing power stations which we need to replace with alternatives that are reliable, good value for money, and help to reduce our emissions.”

The government will consult early next year on when to close all unabated coal-fired power stations.

Since the Conservatives won the May general election, Rudd’s department has pushed for development of nuclear and gas-fired power stations, while cutting subsidies for renewable energy sources. This week the energy department was part of the latest raft of departments to sign up for spending cuts of around a quarter by 2020 as part of the spending review.