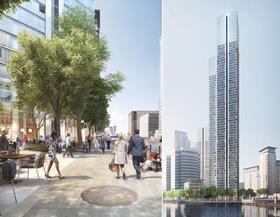 Construction of the UK’s tallest residential tower can go ahead, after Mayor of London Boris Johnson decided not to call in the scheme on Marsh Wall, near Canary Wharf.

South Quay Plaza, designed by Foster + Partners, comprises a 68-storey tower and a smaller 36-storey structure. At 215m, the main tower will be the highest residential building in the UK.

Tower Hamlets Council gave planning permission in November, and Johnson has now written to the local authority confirming he is happy for the project to proceed.

The development will comprise 888 residential units, ranging from studios up to four-bed flats, of which 188 will be affordable. There will also be ground-floor commercial units, car parking and landscaping. Three existing commercial buildings will be demolished.

Changes from the original planning application, submitted in April 2014, include a reduction in the height of the tallest building from 73 storeys to 68, and the introduction of an affordable crèche in the smaller building. A new north-south pedestrian route along the west of the site has also been added.