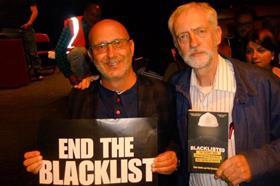 Unions are warning contractors that construction blacklisting will race up the public agenda following the election of Jeremy Corbyn and his appointment of left-winger John McDonnell as shadow chancellor.

The Blacklist Support Group (BSG) has hailed Corbyn’s victory as a “massive boost for the blacklist campaign”, which has been running since the Information Commissioner exposed the blacklisting of 3,213 construction workers by 44 contractors in 2009.

The campaign group applauded the appointment of John McDonnell, a founder member of the BSG, who it said was key to scrutinising the alleged role of the police in blacklisting. In an email to supporters, the BSG said: “One of our own is now the shadow chancellor of the exchequer. He will rip George Osbourne’s [sic] head off.”

McDonnell played a pivotal role in the group, having organised and chaired the first meeting in spring of 2009. McDonnell also wrote the foreword for the book “Blacklisted” by Dave Smith and Phil Chamberlain.

A spokesperson for trade union UCATT said: “We believe Jeremy Corbyn will keep blacklisting on the agenda, keep pressurising the Conservative government and commit the next Labour government to a full public inquiry.”

Brian Rye, national secretary at UCATT, labelled the Trade Union bill, which passed a second reading in the House of Commons this week, as “state-sponsored blacklisting”.