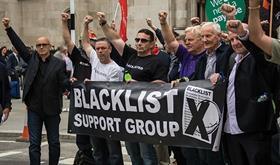 Unite has begun another round of legal action in its ongoing battle over blacklisting, issuing high court proceedings against four former chairmen of the Consulting Association.

The group was set up in the West Midlands in the early 1990s by Ian Kerr, who died five years ago, and ran for 16 years until the blacklisting scandal was exposed in 2009.

Unite’s latest action is part of a wider case being brought by the union on behalf of over 70 construction workers who were blacklisted by the Consulting Association.

The union said the latest cases are for breach of privacy, defamation and for Data Protection Act offence and added that it was taking action against a number of contractors including Sir Robert McAlpine, who Unite alleges provided two chairmen of the Consulting Association, Balfour Beatty and Carillion along with a number of M&E firms including Crown House, formerly owned by Carillion and now owned by Laing O’Rourke, and Balfour Kilpatrick.

Unite has already taken High Court action against the companies involved in the Consulting Association.

The initial court action was completed in 2016 and resulted in hundreds of workers receiving millions of pounds in compensation.

Unite assistant general secretary for legal affairs Howard Beckett said: “Unite is determined to ensure that the people directly responsible for blacklisting workers and ruining their lives are brought to justice and have to answer for their actions.

“Since 2009 the individuals who were the controlling minds behind the systematic blacklisting of workers have sought to avoid taking responsibility for their actions.”

In a statement, Sir Robert McAlpine said blacklisting was a thing of the past at the firm and added: “Blacklisting in construction was, until 2009, an industry-wide issue – most of the largest British construction companies in operation today were involved in the past when there was no legislation in place to outlaw the practice.

“Sir Robert McAlpine has admitted to, and apologised for, its past involvement and has paid compensation to affected workers.

“We were a founding member of The Construction Workers Compensation Scheme which was established to provide affected workers with easy access to compensation and, despite this being an industry-wide problem, we were one of only eight companies that apologised and paid financial settlements to workers through the High Court.”