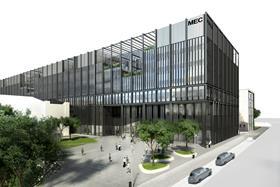 Universities spent £2.5bn on non-residential development projects last year, the highest annual spending on record, according to a new report by the Association of University Directors of Estate (AUDE).

The rise in capital expenditure masked disparities between universities - over a dozen institutions spent over £40m on projects, with four investing over £100m, as a number of universities pushed ahead with major development programmes.

The AUDE’s annual report found the sector’s total income increased to £28bn in the 2013-14 financial year, up £1bn from the previous year. Total expenditure on property was £1.9bn.

Sue Holmes, AUDE chair and director of estates and facilities at Oxford Brookes University, said: “The University sector has faced monumental changes over the past year. The trebling of tuition fees has changed the nature of the relationship between student and provider completely and for the first time ever student recruitment is no longer under government control, creating a competitive market.

“The report shows excellent practice throughout the sector to retain attraction and evolve whilst investment and operational costs are being maintained. The Higher Education Estates Statistics Report is a benchmark for all institutions and I am thrilled that AUDE is at the forefront of ensuring the high quality of the UK university estates and facilities management is upheld.”