Universities cut back on building over funding fears 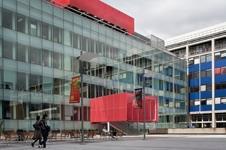 Universities are making dramatic cutbacks to development plans amid fears their future funding will be slashed.

It is understood that some institutions are already cutting back capital spending by as much as 40% because they are concerned that the public spending squeeze will hit funding for the sector when it is reviewed in 2011. The move will come as a blow to construction firms, which rely on the sector for about £3bn of work a year.

Universities typically fund about two-thirds of their projects themselves, which had led to the perception of the sector as a safer market than other education work. However, the institutions fear the remaining money, which comes from the Higher Education Funding Council for England (HEFCE), will be slashed by the next government when it is up for renewal in 2011. HEFCE is planning to spend £1.15bn in 2009/10.

As this would leave universities to make up the difference, many are trying to save money by cutting spending now.

Imperial College in London, which procures about £100m of construction projects a year, is among those making cuts. Leeds and Bristol are also adopting a similar policy.

Imperial is cutting spending by between 30 and 40%. Steve Howe, director of building projects at the college, said: “We’re being very cautious about our plans and are trimming our capital developments so we don’t over-commit. A lot fewer minor projects are being approved to progress, but some major ones have funding prepared.”

Alex Vaughan, a director at Costain, said: “We’re seeing universities fragmenting their programmes. The same work might be done eventually, but they are breaking the work over longer periods, like seven or eight years, rather than three.”

Roger Wyatt, deputy director of estates and facilities at London’s University of Westminster, said his institution was not planning to cut spending, but added: “Some universities will have to defer projects to balance the books.”

Karsan Vaghani, director of capital projects at the University of Bristol, said: “We had a lot of refurbishment projects lined up and will have to slow these down. We will have to cut our annual capital budget from £50m to £30m.”