The New York practice behind the city’s High Line park has been picked to design a new home for the London Symphony Orchestra.

It will be Diller Scofidio & Renfro’s first UK project.

The practice beat teams including Foster & Partners, Amanda Levete, Frank Gehry and Renzo Piano to create a concept for the new Centre for Music, earmarked for the current home of the Museum of London, at the south-west corner of the Barbican Centre.

DS&R will work with Sheppard Robson to create proposals for the venue – estimated to have a pricetag of up to £250m – for project partners the Barbican, the LSO and the Guildhall School of Music & Drama.

“The panel felt Diller Scofidio & Renfro most clearly met the vision and ambition of this project, utilising their experience of creating inspiring new spaces for culture to present a proposal that delivers a world-class concert hall in an outstanding new building, as part of the re-imagination of a key area of the City of London,” they said.

DS&R partner Elizabeth Diller, who will be leading on the centre’s design, said the practice was honoured to have been picked from a “stellar group of architects” for what would be the practice’s first UK building.

“The new building will meet the needs of artists and audiences today with a keen eye toward the future,” she said. ”It will be sensitive to the inherited character of the Barbican.” 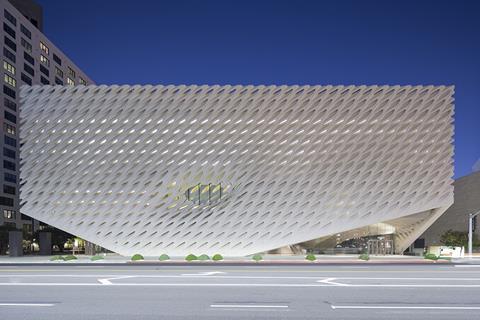 The Broad in Los Angeles, by Diller Scofidio & Renfro

DS&R and Sheppard Robson will be working with a team including Buro Happold, Aecom, Nagata Acoustics, and theatre consultant Charcoalblue to work up a concept design for the Centre for Music for submission to the City of London Corporation by December 2018, as part of a detailed business case for the project.

Catherine McGuinness, policy chairman at the City of London Corporation, said she expected the Centre for Music to become an “iconic landmark” in the authority’s Culture Mile vision, stretching from Moorgate to Farringdon, with a new Museum of London designed by Stanton Williams and Asif Khan at Smithfield at its western end.

DS&R’s cultural projects include the under-construction Shed in New York, work on the Lincoln Centre campus and The Broad contemporary art museum in Los Angeles.

But the scheme was handed a lifeline earlier this year when the City of London Corporation pledged up to £2.5 million to help produce the business case which is due to be completed at the end of next year.