Use of foreign labour at Lindsey 'not illegal' 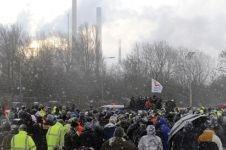 Total did not break the law by indirectly employing Italian workers at the Lindsey oil refinery, a report has ruled.

Strikes were held on construction sites throughout the UK last month after workers joined together to protest over the use of foreign labour at refineries and power station sites.

The row was such that the Department for Business, Enterprise and Regulatory Reform charged industrial arbitrator Acas with investigating whether EU laws had been broken by the use of foreign labour at the Lindsey oil refinery by an Italian subcontractor.

But Acas said there was no evidence that the use of foreign labour at the refinery had broken the law. The arbitrator also rejected claims that the wages paid undercut British employees.

The lack of evidence of wages being undercut is a setback for unions, which have accused firms of using “cheap labour” in preference to employing UK workers.

Business secretary Lord Mandelson announced yesterday a study of skills and productivity to ensure that British firms win as many engineering construction contracts at home and abroad.