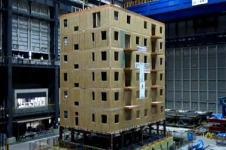 In a snub to US building regulations, American scientists have built and tested a seven-storey wooden building that can withstand a major earthquake.

Technicians took the structure to Miki City in Japan and subjected it to violent shaking comparable to 7.5 on the Richter scale. An earthquake this strong could be expected to hit the planet only once every 2,500 years.

The engineers were trying to challenge regulations that prevent buildings of seven storeys or more being built in an earthquake zone such as the Pacific Midwest.

Engineer John Van de Lindt, from Colorado State University in Fort Collins, said the idea was to use performance-based design to focus on the building as a whole, as opposed to taking a component-based approach.

Initial findings underline the importance of drywall for structural stability and suggest that sole plate, the steel support beams, should be 2.5cm wider than was commonly believed.

During the test, cameras measured the movement of lights on the outside of the building.

Van de Lindt and his team will now analyse the data over the coming months to work out how much structural damage was caused. But he is already heralding the test as a “major development” for wood.