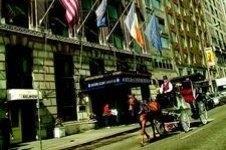 A five-storey building has collapsed on a construction site in New York seven blocks away from the World Trade Centre site.

Fire officials in the city do not believe that anyone was trapped inside when the building collapsed although concerns have been raised over the whereabouts of a homeless man who often slept outside.

The building is on a construction site in the Tribeca district of New York City and it is understood that the front half of the building has fallen away completely revealing the interior of the structure.

Mounds of bricks and rubble fell from the building crushing a car parked on the street below. Buildings Department inspectors are at the scene trying to work out what the cause of the collapse could have been.

A neighbour living across the street from the building said that he saw the collapse at around 6.15am US time: “The bricks started trickling off the top corner. I was thinking was it raining or something. Then within 10 seconds it just all came down like a wave or an avalanche."