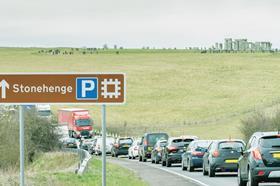 A lack of a secure funding plan and the transport department’s track record on delivering major projects are among the obstacles to plans to build the £1.7bn Stonehenge tunnel scheme, the Public Accounts Committee has warned.

They said: “After several failed attempts, the government believes that it now has a Stonehenge tunnel scheme that is affordable, deliverable and has the support of heritage and environmental bodies.

“However, decisions on how to fund the project are on the critical path for the planned opening date of 2026 and are now at the mercy of the much-awaited Spending Review.”

The PAC also questioned the viability of the scheme given the transport department’s historic performance when it came to major projects.

The report said: “It will be extremely challenging to deliver the South West road improvements to cost and time and the department does not have a good track record in delivering major projects.

“The region needs a properly integrated transport strategy, going beyond road to incorporate rail, sea and air, but the bodies tasked with delivering this strategy are still very immature.”

The Stonehenge tunnel project is a key part of the government’s plans for the A303 road corridor which centres on eight roads schemes which includes work on the A358.

But the MPs said: “So far, the department has only committed to starting three out of the eight projects required along the route.”