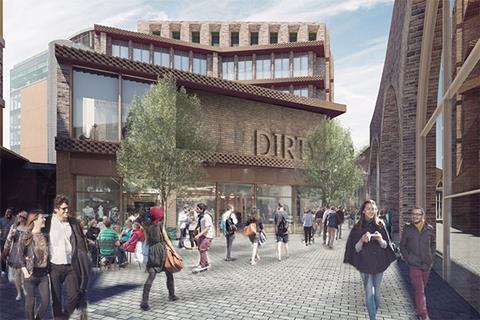 Wates is being lined up to build the £300m “Covent Garden-style” scheme next to Borough Market in London, Building has learned.

The contractor is understood to be the preferred bidder for the scheme designed by architect SPPARC for the area located immediately west of London’s foodie destination, having seen off competition from rival bidders Mace and Kier.

Keltbray is already carrying out enabling works at the site, which includes the former building occupied by wine and whisky attraction Vinopolis.

The site, which also incorporates several rail arches, a car park and an old warehouse, is being revamped by developer Sherwood Street and investment fund manager Meyer Bergman, which are also behind the redevelopment of Whiteleys shopping centre in Bayswater.

Tom Sherwood, owner of Sherwood Street, previously told Building that the site was “one of the last locations” left in London for a scheme “of this size”.

The scheme also proposes to regenerate a set of nearby railway arches and create new routes through the poorly accessible spot, as well as reviving the original Elizabethan street names to the area, such as Dirty Lane.

Plans for the Stoney Street project were originally submitted in August 2015.

However, following comments from planning officers, consultees and residents, they were revised and resubmitted in May last year, gaining planning approval from Southwark council last summer.

SPPARC principal Trevor Morris previously said the designs for the new buildings had been “influenced by the surrounding architecture”, adding that the designs also aim to reinstate “lost medieval north/south pedestrian links through the site”.