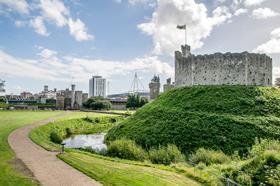 A group of Welsh local authorities led by Cardiff council has begun the search for contractors for a £1bn framework.

It is the third iteration of the framework, with the previous version led by Rhondda Cynon Taf County Borough Council.

Up to 10 firms are expected to be invited to bid for each of the 11 lots, with contractors having until 1 October to register their interest in the deal.

Lot six covers the entire region and caters for jobs worth between £1.5m and £3m, lot seven is for £3m to £5m jobs and lot eight is for jobs with a value between £5m and £10m.

The shortlisted candidates are expected to be invited to tender by 5 November.

According to the contract notice, which was published to the Official Journal of the European Union today, modular solutions could potentially be used across all 11 lots.

The framework will be able to be used by 13 local authorities, both the Welsh and central government, schools, various religious groups and other public sector bodies.