When it’s hip to be square 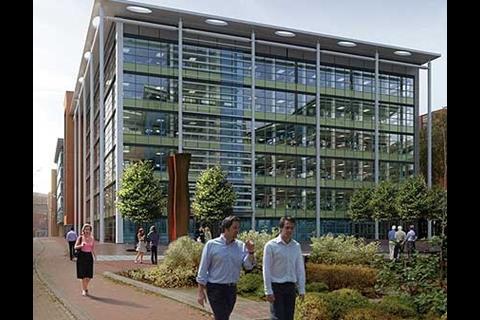 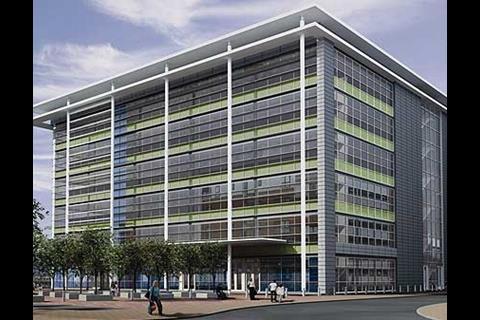 The new Home Office HQ in Sheffield may look an unremarkable block but it is setting the style for green workspace.

Looks may be deceiving, but this municipal building is one of the greenest in the land. Engineering consultants Mott MacDonald worked with developer Wilson Bowden and architect Hadfield Cawkwell Davidson on the award winning building. In-use energy savings, careful fabric insulation and cooling plant specifications were combined with the computer modelled heating of rooms relative to their size.

Argon-filled double-glazing, solar protective glass and insulated ceramic panels were combined with local ventilation and heat reclaim systems. Vulcan House doesn’t immediately set pulses racing. No wildly exotic components leap out from the specification sheet and the eyes of passers-by are not caught by any grand-gesture architectural statements. Yet the Home Office’s new office in Sheffield is one of the UK’s greenest buildings.

When it was awarded BREEAM Excellent status in May 2006, there were only 560 office buildings with a BREEAM rating of any kind. Of those, less than a quarter had achieved excellent. The fact that the building’s outstanding environmental rating is belied by its appearance is a function of the way it has been procured. Vulcan House is a testbed for the Home Office, which has set out to minimise its ecological footprint and is measuring CO2 emissions through construction, operation and, eventually, demolition, says Phil Calvert, the Home Office project manager.

The 2000 Home Office staff based in Sheffield are currently scattered across five sites. “If somebody has a meeting away from their own office they have to catch a bus, take a taxi or walk. Journey times can be up to 30 minutes,” Calvert says. The Home Office wanted to centralise operations in a new, purpose-built headquarters.

Serving the needs of the client

And it wanted to show what it could do to help achieve the government’s target of becoming carbon neutral by 2012. It did not, however, want to be an owner-occupier, so it asked speculative developers to bid for the project. Vulcan House is effectively an environmentally honed spec-built office – a building that does what the client wants with no frills.

The brief established the building’s thermal performance, its energy and water needs, and a requirement for integration of architectural and energy issues.

"If you have a building that’s well insulated, protected from solar gain and airtight, you create an internal environment that’s much more stable and passive. Put people on the north and east sides of the building, where solar gain is least, rather than south and west where it’s greatest and you quickly reduce the amount you need to cool the building. You get a much more efficient, cost-effective environment.”

Vulcan House’s blockish shape was dictated by the desire to put 10,100m2 of workstation space, a 515m2 public area, training facilities, toilets, tearooms, kitchens and a restaurant, into as efficient an envelope as possible over seven floors. “A cube offers the best external area per internal square metreage in terms of regulating the building’s climate,” Murphy says. The block is punctured by a central lightwell, “to get lots of daylight into it”. Floor to ceiling height was set at a relatively high 2.9m to aid daylight distribution across the floors.

“We asked bidders to look at integrating building services with the fabric,” Murphy adds. “It’s not enough to put up a building and slot services into it afterwards. You have to treat the building as a whole from the moment you start.”

Bidders were asked to create virtual thermal models of their designs and subject them to a year's worth of local weather data. “We found we could save 5% energy by changing the orientation of the building ,” Murphy says. The models also established the amount of glazing to be used on each face of the building – 75% on the east and north walls, 50% on south and west.

Structurally, Vulcan House is standard fare: a steel frame built on CFA piles with composite floors composed of 150mm concrete over metal-deck permanent formwork. “We like steel for speed of construction – the frame went up in 12 weeks,” says David Wragg, senior construction manager at Wilson Bowden. “It makes the building lightweight, though there is still enough thermal mass to help to stabilise its temperature.”

Externally, there are no sunscreens or conservatory-style thermal buffers to suggest Vulcan House has environmental aspirations. You could find the same kind of skin on office buildings across the UK, except it is toughened for increased security. A wrapping of argon-filled double-glazing minimises heat transfer through radiation. Solar protective glass is designed to allow through light but prevent heat gain. Insulated ceramic panels minimise thermal loss or gain on non-glazed areas.

In terms of building services ,“there are very few innovations”, Murphy admits. But the speed of computer modelling and analysis has offered previously unthinkable freedom to manipulate the elevations and interior spaces to balance services with the environmental demands placed on them, he says. The relationships between different spaces within the building have been modelled “so that you don’t get a small room requiring heating while the rest of the building needs cooling”.

Power saving is enhanced by local ventilation and heat reclaim systems. “Circulating air locally rather than ducting it over large distances reduces the energy needed to pump it from 2.0W/litre/second, which is what you would normally expect, down to 0.8W/l/s,” Murphy says. Heat is extracted from exhaust air to warm incoming air. Fan coil units have DC motors. “There are no touching parts, so there’s no friction and no waste heat to dispose of,” he explains. Lighting is daylight- and occupancy-sensitive.

In-use energy savings have been complemented during construction by close scrutiny of fabric insulation and cooling plant specifications. “There are no hydrofluorocarbons (HFCs) in the chillers,” Murphy emphasises. "HFCs are now routinely used as a refrigerants in air-conditioning plant since the changeover from chlorofluorocarbons, but HFCs are still harmful.” The global warming impact of 1kg of HFCs is up to 1900 times greater than 1kg of CO2.

“A typical office multi-split air-conditioning system will have upwards of 30kg of HFC refrigerant per system in it, which invariably leaks over time and has to be topped. So, instead, we’re installing direct-drive ammonia chillers. Ammonia is benign in its effect on global warming, and it’s also a better refrigerant. It’s lighter than HFCs so it’s easier to pump around the system, which means using less energy.”

Ammonia is not widely used in building applications because it is perceived as a dangerous substance. But Murphy points out: “It’s been used by the food industry for years.” The risk “is no better and no worse than that of 30kg of HFC being dumped into a bedroom a risk typical for split-system installations in hotels”.

Wilson Bowden has chased down the global warming impact of the scheme through every part of construction. “There’s zero ozone depletion and low or no VOCs,” says Wragg. VOCs (volatile organic compounds) are found in solvents and thinners. “We check with all subcontractors to ensure they’re using approved materials. National suppliers are just starting to get into this; we’re checking internationally.”

Calvert says BREEAM bonus points were gained for water consumption 2.5m3 per person per year, compared with a Home Office target of 3m3. Grey and rainwater recycling is used to flush toilets. In 2003-04, average water consumption per employee was 12.4m3.

“Setting out to attain the BREEAM Excellent rating added a 5-10% premium to the construction cost,” notes Murphy. Using conventional economics, the 13,400m2 building would normally have got no further than the drawing board. The capital cost, including fit-out and finishing, is £40m. “To enable the project to happen we had to work out a rental cost embracing lifecycle costs, and the government signed a covenant guaranteeing that rent for the duration of its 15-year lease,” he says.

Wragg adds that the speculative office market is guided by occupants’ demand for low rent. “Without the government’s 15-year commitment it’s unlikely we would have made the investment. The market isn’t asking for environmental performance on any great scale yet.”

Vulcan House has been a culture shock for Wilson Bowden but it has given the firm a head-start in an emerging market. “We’re now talking about doing the same on projects across the board,” says Wragg, “so that when it becomes a requirement for the construction industry to do this, we’ll have all the data collection systems in place and we'll know who the suppliers with the best performance records are.” Vulcan House’s carbon footprint will be used to establish a baseline for future government and speculative office projects, Murphy adds.

A detailed carbon footprint is being calculated during the construction process. CO2 emissions from the transportation of materials, building components and people have been calculated, based on distance and mode of transport. Fuel, electricity and water used on site have been measured monthly.

All M&E pipework and fan-coil assemblies have been prefabricated by Bradford-based manufacturer NG Bailey and delivered with minimal packaging. What little there is has been returned to the manufacturer for reuse. “And all the elements are small enough to put into a lift, so there's no need for craneage,” Wragg notes.

The biggest threat to Vulcan House’s in-use environmental performance is from the occupants, so the Home Office is engaged in a hearts and minds campaign. Staff are being given simple user manuals and guided tours before they move in. “Understanding the design principles will help them to conserve energy,” Calvert believes.

The Home Office is not appealing simply to employees’ impulse to be responsible citizens. “We’re telling them that their fresh air comes from intakes on their floor, not some centralised unit. It’s travelling short distances rather than down long, dusty ducts. It is therefore much more hygienic,” says Murphy. Staff are being surveyed before they leave their old offices, soon after they move and in a year’s time. “We want to find out whether they feel able to control their environment properly.”

Within Vulcan House, there are meters on everything that moves, according to Murphy. The Home Office is preparing for a BREEAM operation and management assessment, which will check actual against predicted building performance. Sheffield University’s Building Energy Analysis Unit will study the HQ’s energy use patterns as well as sociological impacts of the building in use.

Meanwhile, the Home Office is screening prospective facilities managers. A thorough grasp of the building’s design will be required; low-energy and environmentally benign work methods and maintenance/repair products will have to be demonstrated. Waste minimisation and segregation strategies will be required.

A large part of the Home Office’s CO2 reduction strategy hinges on cutting the number of vehicle journeys. Centralising staff in a single building will eliminate local work-related travel. But the Home Office also wants civil servants to commute by bus or tram instead of by car, so it is offering subsidised fares and route-planning advice. Driving to work is also being discouraged through the restriction of parking places.