The Lincoln HQ is set to open in September 2019 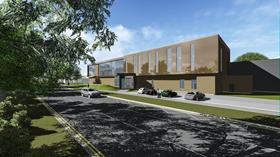 The project, which was procured via Scape’s National Construction framework, will bring fire and rescue services, police force and ambulance service under one roof.

The contractor, who is working with the architect Norr on the project, will demolish the current Lincolnshire Fire and Rescue headquarters to make way for the new combined facility.

The appointment is the latest in a string of contract wins in Lincoln for Willmott Dixon, with the contractor recently completing a £25m transport hub in the city’s centre.

The hub followed completion of Lincoln UTC, which involved converting a Grade II listed former girls’ school into a facility for 14 to 18-year-olds to learn subjects like maths and English, with specialist studies in engineering and science.

The new headquarters is due to complete in September 2019.