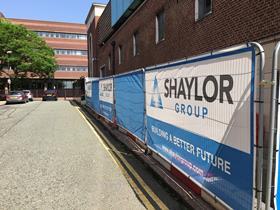 Willmott Dixon has been parachuted in to finish off work at the Wolverhampton venue caught up in Shaylor’s collapse over the summer.

Grade II-listed Wolverhampton Civic Hall has hosted big names such as Ken Dodd, Iron Maiden and Radiohead since it was built in 1938.

Shaylor was carrying out a £38m revamp (pictured) of the Civic Hall, and its sister Wulfrun Hall, when it went under in June.

Now the council has said Willmott Dixon Interiors will deliver the second phase of work to overhaul the venue, so it can once again stage big-name artists.

Willmott Dixon will provide structural, engineering and electrical works, as well as introduce a second balcony in the Civic Hall and a balcony in the Wulfrun Hall.

When it went under, Walsall-based Shaylor, which had a turnover of £142m according to its last set of accounts, owed £47m to almost 700 creditors.

Willmott Dixon joins project manager Faithful + Gould and architect Space & Place on the job, with the halls due to re-opening in autumn 2021.

The 3,000-capacity venue was said to have seen more than 20,000 people try to gain entry when Morrissey began his solo touring career in December 1988 after the break-up of the Smiths the previous year.