Zaha Hadid Architects is one of two UK practices that have been shortlisted in a competition to design two stations for the Moscow metro system.

The other is Anglo-Georgian Architects of Invention which has around 15 staff in London and Tbilisi. It is led by Tbilisi-born Nikoloz Japaridze who has worked in Moscow as well as for OMA, KPF and EPR. 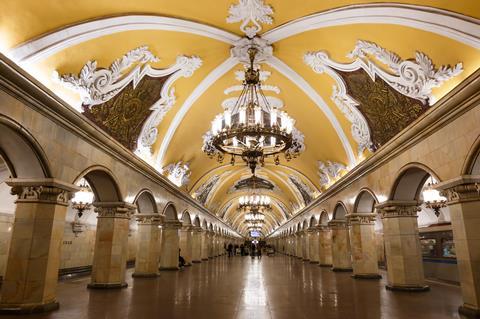 The hall of Komsomolskaya subway in Moscow

Two shortlists of five teams have been announced for the two stations. Most of the other finalists are Russian.

They were chosen by the jury chaired by Moscow’s deputy mayor for urban planning policy and construction, Andrei Bochkarev.

The competition is for stations on two new branches of the Moscow Metro: Prospekt Marshala Zhukova on the Rublyovo-Arkhangelskaya line; and a station with the working name Klenoviy Bulvar 2 on the Biryulevskaya Line.

Winners will be announced on 20 August.