The modular buildings behind the UK’s renewable revolution

Renewable energy generation in the UK is on the rise.

According to the Department for Business, Energy & Industrial Strategy, renewables - including wind, solar, hydro among others - accounted for 47% of electricity generation in the first quarter of 2020, up from 35.9% for the same period in 2019. 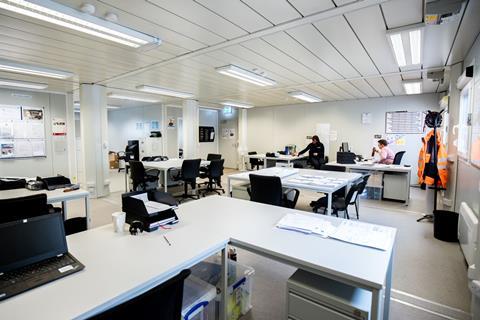 This comes as the UK powers towards several clean energy targets, headlined by the government’s goal to achieve net-zero greenhouse gas emissions by 2050.

The UK already has the largest installed capacity of offshore wind in the world, with around 10GW currently in operation off its coasts.

With a further £160m package announced, the government has increased its offshore power generation target from 30GW to 40GW by 2030 – enough to power every home in the country.

Such ambitious plans require an equally ambitious building operation. The move will see around 2,000 construction jobs created and enable the sector to support up to 60,000 jobs.

One of the subcontractors behind recent projects is modular buildings supplier Elliott, which forms part of the Modulaire Group – the largest modular and portable buildings provider in the world. They tell us about their involvement so far.

Located approximately 30km off the coast of Suffolk, the ‘Galloper Project’ is a £1.5bn offshore wind farm venture that provides up to 336,000 households across the UK with clean energy.

German tech giant, Siemens was contracted to install 56 turbines which will have a total production capacity of 336MW. The vast area that Siemens covers three different sites and totals 183KM².

To complete the offshore project safely, Siemens required several onshore buildings and welfare facilities for their workforce. The most significant of which was a suitable base complete with homely comforts to support daily life in the isolated site.

To provide enough space for the entire workforce, Elliott provided Siemens with 44 of their Moduflex bays. The flexible modular system features fully detachable sidewalls and can be built up to three-storeys high, which means Siemens had no restrictions on the layout they wanted to create.

Another deciding factor for Siemens was that they could use as few suppliers as possible to help minimise disruption and keep the project running smoothly.

The Galloper project was an opportunity for Elliott to present Siemens with their turn-key 360 solutions – demonstrating the advantages of a complete site up through one point of contact.

360 solutions include everything from climate control to a commercial kitchen and catering equipment. Some familiar fixtures and fittings Siemens chose were; air-conditioning, furniture, Wi-Fi, and even project-specific branding.

The Moduflex bays arrived on-site fully equipped which allowed for work on the wind farm to begin ahead of schedule. 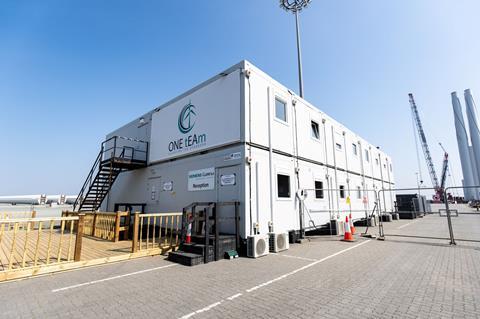 The Greater Gabbard offshore wind farm is a joint venture between SSE Renewables and RWE Renewables.

The project, located on a former herring site, is in a remote location with minimal local amenities, so the facilities had to be suitable to sustain daily life for the 260-week lease period.

Following in-depth consultations, Elliott designed and built the welfare and office accommodation units to the desired specification before arriving on-site.

To keep equipment and confidential information secure, Elliott installed CCTV equipment to ensure the buildings were under surveillance at all times.

As part of their turn-key 360 solutions, Elliott also provided a full mechanical and electrical maintenance package for the duration of the hire contract. This ensured that critical equipment was kept in full working order. A damage waiver was included to protect SSE against any unexpected damage caused over the long hire period.

Overall, both Elliott, SSE renewables, and RWE Renewables were very satisfied with the outcome.

“The building is fantastic, great quality and better than we expected. It’s getting a lot of attention.” 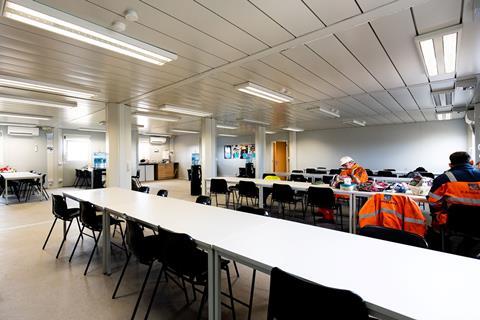 For enormous clean energy projects like wind farms which are often far from local amenities, it’s even more important for on-site buildings to be reliable, comfortable, and convenient.

Moduflex is market-leading modular building systems, purpose-designed for temporary use in wind power, roads & rail, and other infrastructure projects.

Moduflex can be installed faster and easier with no planning permission and often no groundworks needed. This means less disruption and better health and safety for everyone on site.

You can find out more about Elliott and Moduflex here.