A cramped site 20m underground, below a busy street is not an easy place to conduct the £320m upgrade of Bond Street tube station. Especially when the only access is via two 9m-wide shafts. 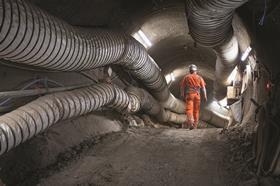 On the north side of London’s Oxford Street a hoarding surrounds a smallish construction site. Despite being painted bright blue and decorated with London Underground roundels the hoarding, and the site it hides, attracts barely a glance from the bustle of shoppers crowding the pavements of one of the world’s most famous retail destinations. Yet behind the decorated screen one of the capital’s most demanding construction projects - Bond Street underground station upgrade works - is under way.

The £320m upgrade scheme includes the construction of a new northern station entrance, a new underground escalator hall for the Jubilee line, interchange improvements between the Jubilee and Central lines, and construction of new lifts to enable step-free access from the street to all platforms. In addition to the station upgrade, the scheme also includes construction of a link to the new Crossrail station which is currently being built under a separate contract to the south of the tube station. When the upgrade is finished in 2017, Bond Street tube station’s capacity will have increased by 30%, allowing 220,000 shoppers and commuters to pass through the station every day.

A small entrance set into the hoarding provides pedestrian access to the site. On entering, the scale of the challenge facing the Costain/Laing O’Rourke joint venture team becomes apparent. From the gate a narrow path snakes past excavations, through the ground floor of an empty building, past two giant concrete storage silos before entering the basement of a second building from where two 9m diameter shafts have been sunk deep into the ground. The two shafts are the only access to the giant subterranean construction site 20m below. 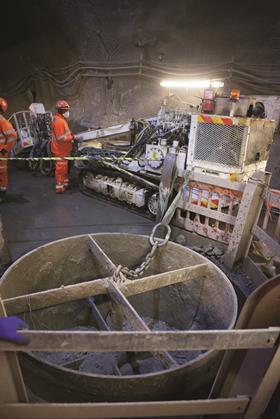 Tendrils of dust-encrusted fabric ductwork dangle down the sides of both shafts. These carry fresh air down to the 90-strong army of tunnellers toiling day and night to drive 500m of new pedestrian access tunnels through the tangle of underground lines, existing foot tunnels, sewers and utilities that clutter the ground beneath the station. In addition to fresh air, men, materials, tunnelling plant, site waste, drainage -everything, in fact, needed to keep the project running 24 hours a day, seven days a week - is either craned up or down the two shafts. It is the infrastructure equivalent of building an extension to your home by bringing all materials in, and waste out, through the letterbox.

Although the labyrinthine site extends outwards for hundreds of metres underground, by contrast above ground activities are contained behind the hoarding, within the 320m2 Oxford Street site. “The site’s compact footprint makes this the most complex tunnelling project in Europe,” explains Miles Ashley, London Underground programme director of Crossrail and stations capital programmes.

This diminutive site, adjacent to the Tanzanian High Commission and within a shovel’s length of a five-star hotel, occupies the footprint of a former six-storey office building which was demolished in 2010 to enable excavation of the access shafts.

The challenge for the construction team was that the excavations left no space on the compact site for welfare accommodation and other construction activities. In an inspired solution, the joint venture contractor successfully created the additional space by effectively extending the site vertically with the construction of a six-storey steel and concrete composite frame standing astride the two shafts.

The lower part of this structure has been constructed with triple-height, precast reinforced concrete columns (manufactured at Laing O’Rourke’s Explore facilities in Nottingham) to support the gantry for the two 17.5 tonne cranes that raise and lower materials down the shafts. The columns incorporate additional strengthening to allow the frame to function without installation of the floor structures on both the first and second floors, which creates a 12m-high space to allow the gantry cranes’ unobstructed operation. Above this crane-hall the frame also supports three floors of site accommodation, including a canteen for 160 workers, workshops and welfare facilities, while perched on top of the structure, as far as possible from the pollution of Oxford Street, are the tunnels’ ventilation plants. 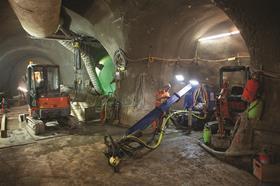 Ingeniously, this composite steel and precast concrete frame will be used twice. When the upgrade works are completed the site accommodation and gantry cranes will be removed and the remaining structural elements forming the first and second floors will be installed. The frame will then be reincarnated as the (somewhat over-strength) structure for a new building which will incorporate shops at ground level and four floors of swanky one- and two-bed apartments above.

The only element of the structure that will not be reused is a lean-to attached to the frame’s eastern end. This spans the end of Marylebone Lane, a narrow side-street that houses the site’s only delivery bay, which is only just large enough to accommodate a single vehicle.

Unfortunately for the construction team the delivery bay is also next to the five star hotel so, to prevent noise from both deliveries and the workers in the canteen disturbing their neighbours - and to ensure the site complies with Westminster Council’s Section 61 agreement for noise generating activities - the entire structure has been clad in powder-blue Kingspan insulated cladding panels. The addition of a roller-shutter door on the delivery bay completes the enclosure. This is rolled shut at 11pm and remains down until 7am the following morning.

The delivery bay’s location next to the crane gantry allows materials to be craned to and from delivery vehicles and lowered directly down one or other of the shafts to the subterranean site. Here, in the dust-laden, arc-lit subterranean gloom the last of the new tunnel excavations are nearing completion. Each of the vertical shafts serves a dedicated construction complex: Shaft 3 serves what London Underground’s Ashley terms the “northern tunnels”, which are those being constructed to improve access to the Jubilee line. Shaft 1 is dedicated to the “southern tunnels”. A series of tunnels and shafts that have been excavated to create a step-free access route to both the Central and Jubilee lines and the new interchange tunnel links the underground station to the new Crossrail station, which is set to open in 2018. 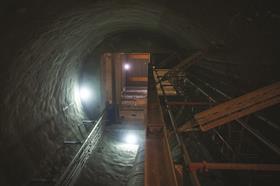 Construction of the northern tunnels is almost complete, with excavation of the final cross-passage that will link the two Jubilee line platforms at their northern end about to start. Meanwhile, in the southern tunnels current focus is on excavating the new Crossrail interchange tunnel. This has reached the point where it crosses over the top of the two Central line platform tunnels, with this rectangular section of tunnel being excavated by hand using traditional mining techniques, to ensure the platform tunnels are not damaged. Ashley says constantly having to change the diameter of the tunnels and the method of their construction is what has made this tunnelling project “so complicated”.

While some tunnels are rectangular where they are squeezed around existing structures, most of the newly dug tunnels are circular in cross-section and incorporate a sprayed concrete lining (SCL). The tunnels are driven through the London clay one metre at a time, which is the maximum distance the surrounding clay is capable of supporting itself unaided, using conventional tunnelling plant. As the excavation progresses a temporary lining layer is first sprayed onto the newly excavated tunnel walls to stop the clay drying out and losing its strength, then a 250mm thick layer of permanent SCL is applied. The lining gets its strength from the thousands of 38mm long stainless steel fibres incorporated into the mix. “The bulk of the tunnels have been dug and have the primary lining installed,” Ashley explains. 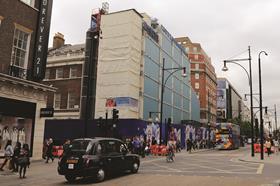 Logistics below ground is as important as it is above. The powdered concrete and stainless steel fibre lining mix is piped down the vertical shafts from the two giant silos close to the site’s pedestrian access. The powder is mixed with water (also piped down the shafts) before being pumped to a spraying robot. To ensure there is always a continuous supply of concrete available for spraying everything is duplicated; as a consequence there are two storage silos, two concrete powder pipes, two water pipes, two pumps and even two spraying robots.

Later, when all the new tunnels have been excavated the tunnellers will withdraw from their underground lair back to the two vertical shafts. As they do so, they will apply the final layers of the tunnels’ lining. First a regulating layer is applied to create a smooth finish over the initial SCL layer to ensure any stainless steel fibres projecting from the concrete are covered before a waterproofing layer is applied. This layer is followed by the main structural layer of sprayed concrete before a final finishing layer is applied to cover any projecting metal fibres that might otherwise injure workers. 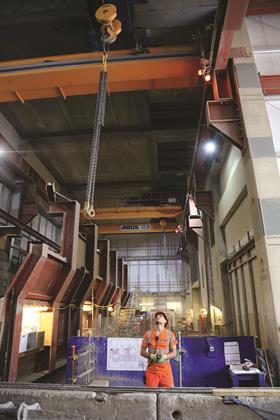 As the tunnellers start their exit, from September their place below ground will be taken by the fit-out team. Logistics will be as critical for this team as it was for the tunnellers. “For the fit-out virtually everything has to come down the two shafts,” says Andy Koniotes, fit-out manager for Costain/Laing O’Rouke.

The fit-out is about turning this concrete warren into a functioning station for the public. The work will involve screeding and tiling the tunnel floors, installing suspended ceilings and lining the walls with either vitreous enamelled steel panels or, in some areas, constructing blockwork walls. Generally, walls in the southern tunnels will be finished with vitreous enamelled panels to allow access to the power, CCTV, communications cabling and fire hydrant pipework behind, while in the new Jubilee line tunnels, where there are far fewer services, most walls will be constructed from blockwork.

“We have to agree delivery windows with the other site disciplines to enable components to be moved to their place of use below ground,” Koniotes explains.

One of the most challenging elements of this subterranean fit out is construction of two new 30m-long escalators and the installation of four lifts, all of which will have to be capable of being craned down the access shafts and manoeuvred through the tunnel network to their final locations. To facilitate this, the escalators will be supplied in 4.5m lengths, which will then be bolted together at the foot of the escalator incline and then lifted and jacked into position. Similarly the lifts will be delivered as a set of component parts. Just to be sure, Koniotes is also exploring other material delivery options including night-time deliveries to the Jubilee line platforms using engineering trains, even hoisting materials down a ventilation shaft. “In terms of fit out, the technology is fairly standard stuff,” explains Koniotes. “It is the logistics that are challenging,” he adds, echoing the mantra for this project.