This year’s contractors and housebuilders Top 150 shows the sector pulling out of recession, but economic danger remains 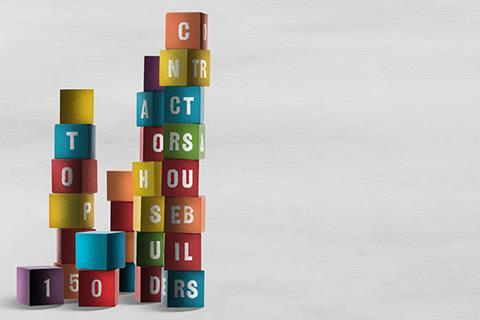 Nine years on from the credit crunch that caused the biggest economic collapse in 60 years, Building’s Top 150 tables of contractors and housebuilders paint a picture of an industry still in recovery.

And – as is appropriate for tables produced during the European football championships in France – the data, based on the published results of the biggest firms in the sector, shows a game of two distinct halves. While housebuilders have been growing stronger, making big profits on a healthy market since 2013, contractors seem stuck on the injury list.

Now, with the wider economic climate already turning distinctly gloomy, both sides of the industry are facing the fallout from Brexit. In the first 10 days after the vote, housebuilder share prices dropped by 30-40%, with contractor values falling by 15-20%. Residential and commercial property funds suspended trading to stem the volume of sellers attempting to abandon them.

In truth, very few in the industry have any sense of how serious the real-world fallout of this political, economic and market uncertainty will be.

“I’ve never known so many people say they just don’t know what’s going to happen,” says Building Value chief executive Tony Williams. Vince Corrigan, group director at specialist contractor Keltbray, sums up the air of wary uncertainty. “It’s like we’ve had an earthquake – we just don’t know whether there’s going to be a tsunami to follow. We’ve got to wait and see,” he says.

So, with the future uncertain, what do the tables tell us about the shape the industry is in and its ability to withstand any economic shocks further down the road?

Much of the talk in the national press around the economic fallout from Brexit has focused on speculation about a collapse in the housing market, with the Treasury suggesting that prices could be hit by as much as 18% in the two years following the vote to leave the EU. Before the vote, housebuilders were already dealing with a cooling off in the higher end of the market due to stamp duty changes and uncertainty over the referendum.

Despite the terrifying drops in housebuilders’ share prices since the vote, however, the data suggests this part of the industry may be resilient to the Brexit effect. The results show the profit margins of the top 30 housebuilders have a healthy average of 14.4%. Turnover grew by 14% in one year, and rose by 40% in the past two years. In addition to turnover and profitability, housebuilders have also made great strides in reducing their debt burden and improving return on capital.

Kevin Cammack, analyst at Cenkos, says: “There isn’t a major housebuilder out there that’s not making more margin now than they were in 2007-08 when the last recession hit. They’re operating well above their margin trend across the cycle so they can afford some pressure there. There will be a slowing down, but the housebuilders’ ability to combat it has probably never been greater.”

Cammack isn’t alone in this analysis. “Profits may be hammered in the short term but, compared with 2008, the industry has put its house in order – it’s better managed with no debt. If anything, it will give many an opportunity to pick up land more cheaply,” says Building Value’s Williams.

Contractors, however, are in a different position. Far from convalescing in the past year, their condition has actually deteriorated, with the average profit margin of the top 50 dropping from 1.16% last year to a dismal 1.05% this. More than one-fifth of contractors in the table reported a loss and, despite a buoyant market and sharply rising construction costs, contractor turnover was broadly static, actually dropping slightly.

Most of the contractors are not ready for another downturn. They haven’t built up their reserves yet

In addition, in broad terms, the bigger the contractor, the worse they performed. The contractors ranked 50-100 reported an average margin of a much more steady 3.4%, in line with long-term industry rates, and only six were loss making. Cenkos’s Cammack says: “Contractors have got nowhere near as far along the recovery path as you’d expect at this stage in the cycle. Generally, they will look to rebuild their order books first before rebuilding margins by being truly selective about work. But most have only sort of got through the first stage of that and aren’t yet getting full margin. Now they’re facing the prospect where order books are starting to dry up again.”

More serious, perhaps, than the state of their order books is the condition of contractors’ balance sheets. Many fell into debt during the downturn and have not yet found a way out of it. Mike Peasland, a former Balfour Beatty UK managing director and now a John Sisk non-executive director, says: “There’s still a lot of pain in the sector and a lot are trying to repair their balance sheets. Contractors generally are in a much worse financial position going in to this compared with 2008.”

Steve Beechey, group strategy director at Wates, who says his firm’s balance sheet remains strong, agrees there is a wider “big problem”. He adds: “Most of the contractors are not ready for another downturn. They haven’t built up their reserves yet, and it leaves the sector very exposed, and some contractors very, very exposed.”

“Longer term the prospects are good,” he says, “but that could take a number of years and the fear is some companies won’t be here by then.”