Contractor picked to transform media centre into a technology hub 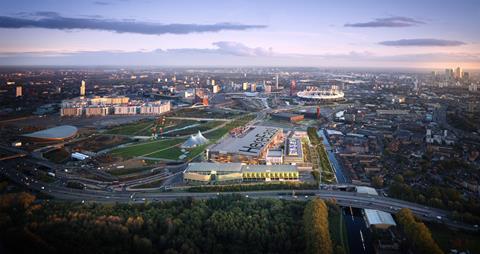 Laing O’Rourke has won the £100m job to transform the London Olympic media and broadcast centre into a tech hub.

The firm saw off competition from Mace and Carillion to take the job.

The Here East scheme, formerly known as iCity, will include one million square feet of space, mostly aimed at digital businesses.

The scheme has been designed by architect Hawkins/Brown for developer Here East - a joint venture between Delancey and data centre operator Infinity SDC.

Gavin Poole, chief executive of Here East, said: “We can confirm that Laing O’Rourke have been selected as preferred contractor, subject to further negotiations, for the development of Here East on Queen Elizabeth Olympic Park.”

“Laing O’Rourke recognise our commitment to local employment and apprenticeships throughout the construction phase building on the success of the transformation of the Queen Elizabeth Olympic park.”

The plans for the building were given the green light by the London Legacy Development Corporation last month and work on site is expected to start this summer.