As Building’s review of the 12 stadiums hosting the Brazil World Cup continues, we look at the most environmentally ambitious of the World Cup stadiums, Arena Pernambuco 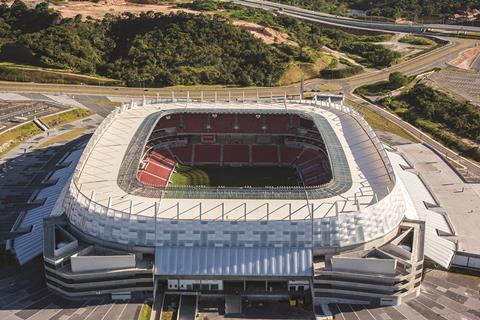 This new multi-purpose venue is actually part of a much larger regeneration project that will also bring other leisure, residential and commercial developments to a deprived area of Brazil’s most easterly major city. Its design is also one of the most interesting and environmentally ambitious of all the new World Cup stadiums. The stadium resembles an artificial crater and its four-sided facade is entirely composed of ETFE cushions. According to its designers this is the first time ETFE has been used in this manner in South America. The ETFE admits natural light into six floors of extensive hospitality areas incorporated into the stadium and also transforms the stadium into a pulsating beacon of light and colours at night. Other sustainability features include rainwater harvesting, a sophisticated waste management scheme and a solar power plant that will generate 1MW of energy for both the stadium and surrounding developments.