We head to the venue of England’s third group match against Costa Rica, Estadio Mineirao 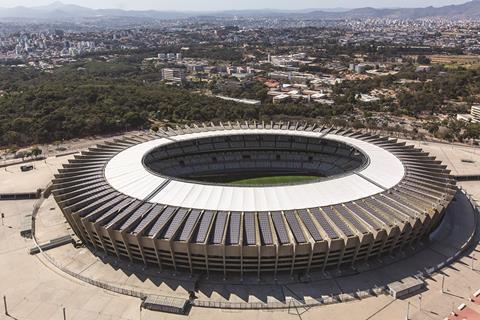 With its brutalist, finned concrete facade, Estádio Mineirao is both an engineering landmark and one of the most historic venues in Brazilian football. It is also a listed national monument so both the facade and roof were preserved during the £220m refurbishment project that have seen it upgraded to a World Cup venue. Modernisation features involved lowering the pitch by 3.4m, the removal of an athletics track, additional pitch-side seating and improved accessibility. Subsidence in the massive concrete superstructure was also corrected using hydraulic jacks and steel cables. Hopefully Estádio Mineirao will not be the last the England team see of Brazil - they play Costa Rica here in their final group stage game on 24 June.