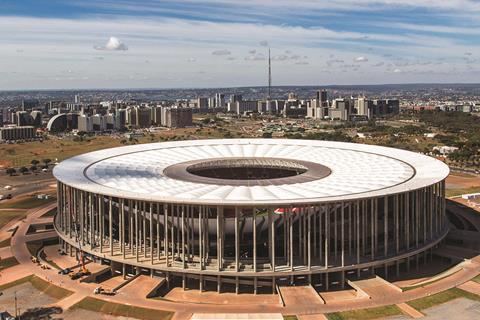 This reconstructed stadium has already scored a number of global firsts. At a cost of just over half a billion pounds, it is believed to be the world’s second most-expensive football stadium after Wembley. It is the first stadium in the world to gain coveted LEED Platinum certification. Castro Mello Arquitetos, who designed the original seventies stadium, have created a striking new design that forms a contemporary reinterpretation of the sepulchral, sculptural architectural forms that architect Oscar Niemeyer turned into Brasilia’s signature Modernist style. A towering forest of 46m high “piloti” columns encircles the seating bowl, provides natural shade and supports a rooftop concrete compression ring that holds in place a retractable, translucent inner roof suspended by a  wheel of radiating spoke-like cables. The stadium’s green credentials are proven by the 169,000ft² of rooftop solar panels; its pollution-neutralising rooftop membrane and the fact that 95% of the demolished stadium was recycled for its reconstruction. Although the stadium has been designed as a multi-purpose venue, Brasilia is home to no major football teams and as yet, no future long-term tenant has been secured.