Six stadiums that tell the story of English football

The Football Association is 150 years old this week and, to celebrate, Building picks out some of the architectural highpoints of English stadiums 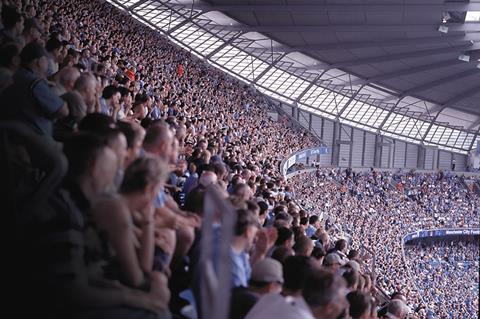 Exactly 150 years ago next Saturday evening, 12 representatives from a handful of amateur football clubs in and around London met in the Freemasons Arms pub in Covent Garden and decided to thrash out the first ever comprehensive set of rules for their fledgling game. After fierce and presumably alcohol-filled debate and a slew of heretical proposals such as players not being allowed to run with the ball and hacking of shins being actively discouraged, the modern game of football was born.

The 12 went on to form the Football Association, the world’s oldest football governing body, which recently celebrated its landmark anniversary by hosting an unprecedented commemorative match in Buckingham Palace Gardens earlier this month.

Football’s contribution to global sport and culture is clear, but what has it ever done for construction?

More than you might think. Football did not invent the sports stadium but it undoubtedly resuscitated it. Millennia ago the Greeks and Romans built colossal arenas for the mass spectator sports that were such an integral part of their society.

But in the centuries that followed, western culture concentrated instead on the allegedly more enlightened architectural pursuits associated with building palaces and cathedrals. It was only after that fateful quorum in Covent Garden 150 years ago that the football stadium as we recognise it was essentially born and exported, along with the “beautiful game” itself, from England to virtually every corner of the globe.

So, to help celebrate football’s historic anniversary and in recognition of the fact that not all pub drinking sessions need end in raucous oblivion, here’s a selection of six key English stadiums that represent the social and architectural highpoints of 150 years of football. 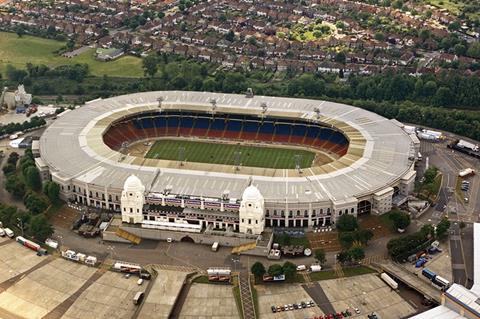 Like the Millennium Dome and London Eye, it was originally intended that the stadium be demolished after the exhibition but a subsequent canny exchange of ownership secured its future as a football stadium. Since then, Wembley has become the annual host of the FA Cup Final, the home venue of the England football team and for millions around the world, an icon of the game.

Accordingly, Wembley’s milestones are manifest. Fourteen miles of concrete formed the terraces; it was the first stadium to which the term “hallowed turf” was attributed; it is the largest stadium in the UK and the second biggest in Europe and, on its inaugural FA Cup Final in 1923, set the still unbroken world record for the highest ever unofficial sports attendance figure when a stupendous 300,000 plus were estimated to have poured into the stadium.

After that event and to control numbers at subsequent matches, the FA introduced mandatory paid ticketing for the first time. Wembley’s famous twin towers were also among the first examples of football stadiums attaining a recognisable architectural identity of their own and they quickly became iconic symbols of the game. They and the original stadium were replaced by Foster + Partners’ new venue at considerable public cost and controversy in 2007. Six years later the jury is still out as to whether the new 134m-high Wembley Arch will ever enjoy the hallowed status of the vanquished towers. 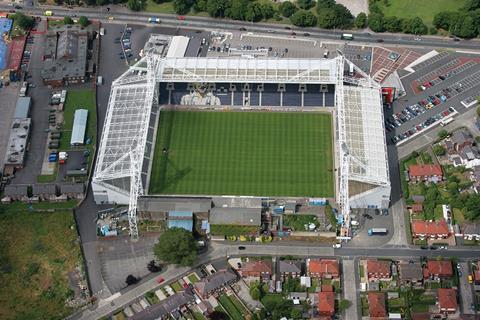 Deepdale stadium is widely recognised as being the oldest “continuously used” football stadium in the world. But like most coveted historic accolades, it is fiercely contested. Its principal challenger is Bramall Lane stadium in Sheffield. Bramall Lane was actually constructed 20 years before Deepdale but as piqued Lancastrians are keen to stress, Bramall Road opened as a cricket ground not a football stadium.

Undeterred, Bramall’s supporters sneer at the fragility of Deepdale’s “continuous use” claim by pointing out that the ground was used as a prisoner of war camp during the Second World War. Defiant Preston North Enders retort that prisoners play football. Somewhere within this gentle cycle of rebuttal the truth invariably lies. But it hardly matters because both stadiums prove that althoughmodern professional football was invented in London, it was the industrial north with its legions of working men that created the world’s earliest forms of football stadium architecture.

Today, all four original stands have been replaced by modern structures and like all English stadiums, capacity is now a fraction of that accommodated during the days of standing terraces (53,000). Deepdale is not the only entity that renders Preston an unlikely hub of innovation: Preston North End was one of the founding members of the Football League in 1888 and the UK’s first motorway, the Preston bypass, opened here in 1958. 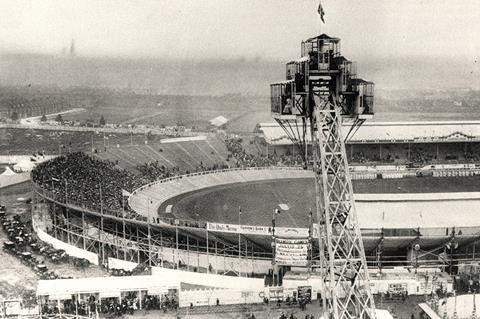 With an astounding capacity of 150,000, twice the size of Old Trafford, White City stadium was the largest stadium in the world for many years. The astonishing story of its construction is testament to the famed ingenuity and resolve that characterised the Victorian and Edwardian age. The stadium was constructed in just 10 months and was initially built for the 1908 London Olympic Games. But incredibly, the British Olympic Committee was able to convince the organisers of the Franco-British Exhibition taking place at the same time to not only share their site but also fund the construction of the stadium, thereby weaving the principle of multi-functionalism into the stadium’s DNA.

Consequently, over the years that followed the venue hosted a vast array of sporting events ranging from cycling, swimming and athletics to speedway racing, boxing and of course, football. But White City’s innovation was also its downfall. Because of its multiplicity of uses and the fact that no definitive post-Olympic role for it was ever devised, during much of the last century it fell into a long period of sporadic use and decline, a process that accelerated after the construction of rival Wembley as the showpiece national stadium. White City was finally demolished in 1986, apparently leaving nothing but its name to a small corner of west London.

But while all physical trace of the building has been extinguished, its historic legacy is vast. It was the world’s first purpose-built Olympic stadium and it is widely recognised as the world’s first modern multi-purpose, multi-seater stadium. It thereby set the multi-functional template that has since been adopted by football stadiums across the globe. 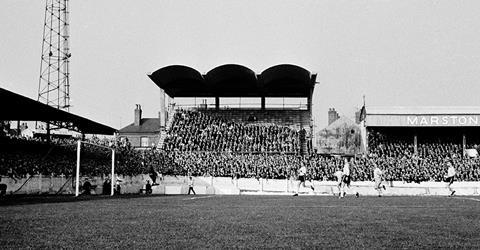 Highfield Road stadium was demolished in 2006 and has now been replaced by a housing development of such banality as to render even the most ardent anti-football observer nostalgic for the stadium’s return. But while Highfield Road may now have been consigned to history, it made a gigantic contribution to English football by being the first stadium to be converted from standing terraces to an all-seater stadium in 1981.

It was none other than broadcasting luminary and former Coventry manager Jimmy Hill who pioneered the transition but it did not go down well with fans. Even by the incendiary standards of eighties football hooliganism, disgruntled Leeds fans reacted with a remarkable degree of violent ingenuity by promptly ripping out hundreds of seats and deploying them as airborne missiles barely months after they were installed. Unsurprisingly, the experiment was abandoned less than two years later and the terraces returned. It was not until the tragedy of Hillsborough in 1989 and the landmark Taylor Report that followed it that all-seater stadiums became compulsory for all UK top-flight football clubs.

While some mourn the alleged loss of atmosphere, there is now virtually universal acceptance that all-seater stadiums are the safest way to accommodate the huge crowds that football matches routinely attract. Highfield’s Road’s experiment may have been short-lived, but in its own small way and like the catastrophe at Hillsborough, it contributed to the safety standards now commonplace within English stadium design. 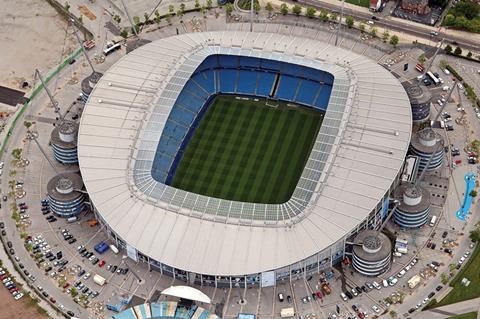 The first major new football stadium of the 21st century represents a shrewd financial and architectural consolidation of two wildly different sporting requirements. The City of Manchester stadium was built for the 2002 Manchester Commonwealth Games and converted into the home ground of Manchester City football club immediately afterwards.

But crucially, the original athletics stadium was specifically designed to be converted into a football stadium post-Games, thereby ensuring a quick, seamless and relatively cost-effective constructional transition that has since secured a viable long-term legacy for the venue. Part of the conversion involved removing the athletics track, lowering the pitch to accommodate an additional tier of seating (capacity was increased by around 10,000) and installing scores of leisure and corporate entertainment amenities.

Today the Etihad stadium (as sponsorship dictates it is referred to) is the eighth largest in England and, in the commercially diverse tradition of modern sporting stadiums, also hosts a plethora of non-football events. Its distinctive profile of 12 masts supporting a tensile cable net system has become a key local landmark, and while it reflects the structural expressionism popular in contemporary stadium design, it forms a significant departure from the conventional cantilevered or truss roofs often found at English stadiums. 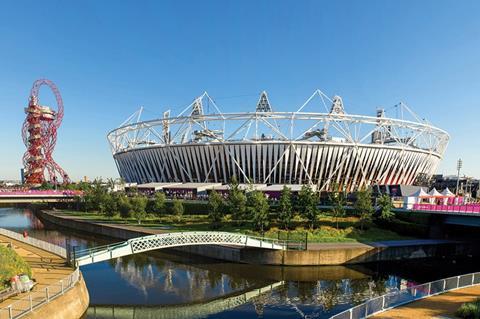 The Premiership’s newest football stadium will open when locals West Ham move in for the start of the 2016-17 season. But what is still the Olympic stadium’s tumultuous history began long before. When London initially won the 2012 Olympic bid, the Olympic and athletic organising bodies were reluctant to see the venue’s athletics legacy consumed by football and initially resisted the prospect of a Premiership club moving in after the Games, despite the fact that, realistically, football was the only sport capable of assuming the financial burden of such a venue.

Luckily, the initial proposal to demolish two-thirds of the stadium and convert it into a 25,000-capacity athletics arena was abandoned and the bidding process was shortlisted to Tottenham and West Ham. Tottenham wanted to relocate from seven miles away, flatten the stadium and rebuild it without an athletics track, a proposition only marginally less moronic than the initial athletics proposal. West Ham on the other hand kept the track and proposed a multi-purpose venue. West Ham won, Tottenham cried foul and at the 11th hour, just before the 2012 Games, the Olympic authorities threw out both bids and started the entire process again. As it happens West Ham won this second round with plans that closely matched their original vision.

But despite their undoubtedly presenting the most viable bid, it will still cost a whopping £150m of largely public money to convert the venue, almost four times as much as it cost to convert the Etihad stadium. Had the precedent of the Etihad stadium been followed and post-conversion use and criteria been embedded into the stadium’s original design, then considerable additional public expenditure and eight years of farcical prevarication and delay could have been avoided. One of the key stumbling blocks during the conversion process has been the age-old question as to whether football stadiums can accommodate athletics tracks without compromising atmosphere and sightlines.

While this doesn’t appear to be problem at countless grounds across Europe, including Lazio and Spartak Moscow, it is a proposal normally met with suspicion in England. We are yet to see how West Ham will resolve it. But what is clear is that when they eventually move in, their new home will represent the latest chapter in the colourful 150-year evolution of English football stadium design.