The reinvention of the Bacton Low Rise council estate shows that regeneration is as much about residents as construction - and that it is better to view the local community as an asset than a hindrance. Ike Ijeh reports. Photography by Tim Crocker 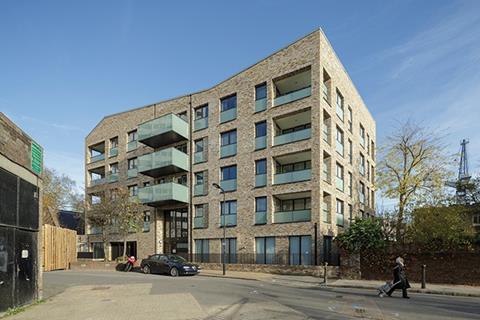 The winner of this year’s Housing Project of the Year at the Building Awards was phase 1 of the Bacton Low Rise scheme in north London by Karakusevic Carson Architects and Rydon Construction. Like many residential regeneration projects, the scheme is intended to rebuild a deprived, dilapidated inner-city housing estate by replacing old social housing units with better new ones.

Bacton Low Rise is a cut above the rest for two additional reasons. First is the exemplary quality of the new housing stock, which includes lavish social housing accommodation such as five-bed, four-storey townhouses which feature, incredibly, private roof-top terraces.

Second, the project represents a superlative example of rigorous and genuine community engagement in action. When it comes to urban regeneration, community architecture is often an oxymoron, with regeneration frequently hijacked by politicians, developers and even architects themselves, who often impose an alien and formulaic vision of improvement onto an oblivious community largely marginalised from the design process.

This is particularly the case in economically buoyant London where the rush to redevelop frequently leads to a fundamental failure of the design and developer team to sufficiently examine the innate existing community infrastructure that inevitably forms such a vital characteristic of even the most deprived areas.

But, thanks to a Herculean effort from an extraordinarily galvanised and motivated volunteer tenants’ and residents’ association (TRA) and the willingness of the client and design team to genuinely listen to and engage with them, Bacton Low Rise successfully demonstrates how a highly organised and resolutely self-empowered residential body can do as much to define the terms of the regeneration as the professionals officially tasked with delivering it.

Before it was rebuilt, the Bacton Estate comprised a series of low-rise perimeter deck access blocks, some of which backed onto the main railway line from St Pancras Station. Like so many inner London council estates, Bacton owes its existence to the Second World War. Built in the 1960s on the site of an area where buildings were almost razed to the ground by bombing, it is encircled by Gospel Oak’s grand Victorian villas, creaing a charming physical and social incongruity that remains such a distinctive part of London’s character.

The Bacton Estate itself was part of an extraordinarily ambitious programme of post-war housing commissioned by the London Borough of Camden from the 1950s onwards. Built on the site of the former William Ellis School, which was largely destroyed in the war and was relocated to nearby Parliament Hill, the estate is surrounded by other residential projects by some of the leading figures of British mid-20th century architecture, including Powell & Moya and Benson & Forsythe. However, Bacton’s cheap brick construction and dull municipal design ensured that it never matched the modernist heights of some of its neighbours. 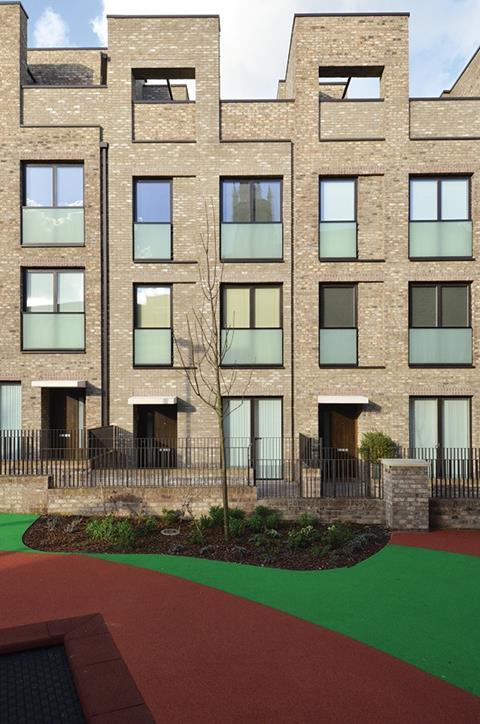 The new homes are designed to be low maintenance and include five-bed, four-storey townhouses with private roof-top terraces lavishly finished in oiled timber decking

By the 1990s, Bacton Low Rise was exhibiting the long-term problems prevalent across 1960s council estates – poor insulation, crumbling fabric, inappropriate design and high levels of anti-social behaviour facilitated by multiple deck access, compounded by a profusion of unsupervised areas such as garages and undercrofts.

To address these maladies, Camden authorised a major refurbishment between 1998 and 1999 as part of its capital works programme. Incredibly, this actually made the situation worse; quick solutions such as cosmetic over-cladding to deficient structures failed rapidly, making the problem of poor insulation worse.

In an extreme example of fuel poverty, matters deteriorated to such an extent that, before the latest rebuilding programme, residents already struggling on low incomes were complaining of staggering energy bills of up to £80 a week. Obscenely, at the same time, they were still forced to instruct their children to wear coats indoors as the heating was flowing out through the walls and windows.

It was not just energy and insulation that presented difficulties. Residents were clear where they thought the biggest problems lay – poor maintenance by the council. A common scenario provides a strong example of their gripes: because the council consistently failed to prune trees adequately, residents were forced to leave their lights on all day – which added to their fuel bills – as the trees blocked natural light from their homes.

It is this backdrop of difficulty and forbearance that helped define the design solutions developed when Rydon and Karakusevic Carson were eventually appointed to redevelop the estate in 2010. The TRA was absolutely clear about what it did and did not want.

Brickwork was a must as were sloped roofs to provide character and avoid the leakage problems that had besieged the previous flat roofs. Safe children’s play areas were also important to provide the kind of child-friendly and family-orientated environment that had been consistently suppressed by criminal and anti-social behaviour. Demolition in favour of new tower blocks was resolutely rejected, as was the council’s initial breathtaking proposal to permanently rehouse each resident almost 200 miles away in Barnsley, south Yorkshire.

The TRA was unequivocally clear about what the overriding characteristics of the new scheme should be – durable, hardwearing and made of low-maintenance materials. Conscious of the council’s previous maintenance shortcomings and wisely concluding that austerity cuts were unlikely to improve matters, the residents insisted on materials and design features that would require as little maintenance as possible. 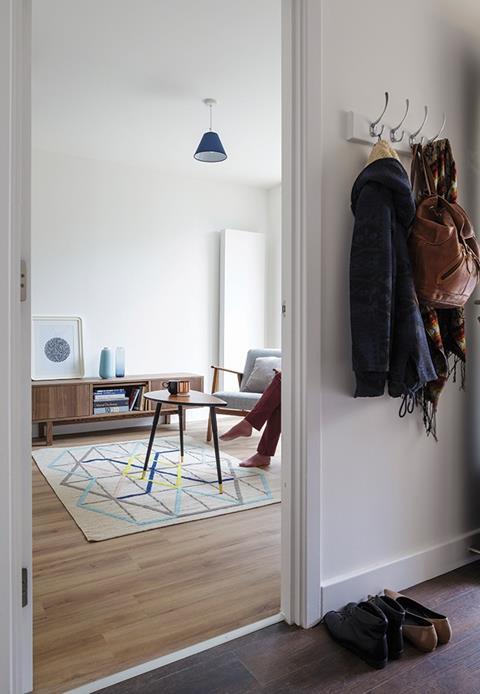 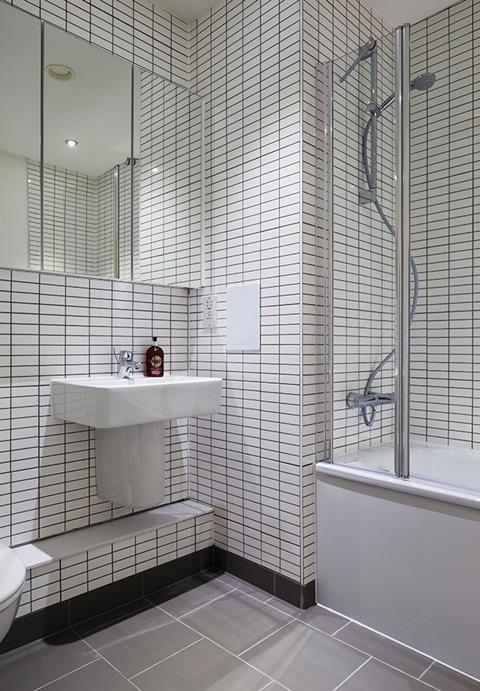 Now that the TRA had established a clear position, the next challenge was conveying it to the design team during community consultation. This process is frequently viewed as box-ticking exercise, where the risk of residents erecting unforeseen roadblocks across an preordained route must be minimised at all costs.

However, thanks to the combined efforts of both residents and the design team, community consultation at Bacton Low Rise was a masterclass in true engagement. Barbecues, fun days and family entertainment events were frequently organised, with the only proviso that residents first commented on whatever stage the proposals had reached.

The TRA was fully involved in all stages of the process, even visiting the factory in Belgium where the bricks were manufactured.

Charged by their bruising experience with the 1998 capital works refurbishment, the TRA was also crucial in the appointment of Rydon, first visiting a selection of its previous schemes as well as those of the competing bidders. The TRA reveals that while Rydon’s bid was not the cheapest, it left them most confident regarding the quality of work.

A crucial factor in the empowerment of the TRA and residents generally was the training they received from the Glasshouse Trust, a charity dedicated to providing residents with a wide-reaching range of building-related skills such as reading floorplans, scrutinising construction estimates and understanding the bewildering complexity of the planning process.

As built, the new Bacton Estate is as pure an architectural expression of the preceding consultation process as you are ever likely to find on a modern housing project. As phase 1 was built on the site of Camden’s former district housing office, the construction of this part of the estate did not require any residents to be relocated until it had been completed and they could move in, freeing much of the remainder of the site for demolition for subsequent phases. 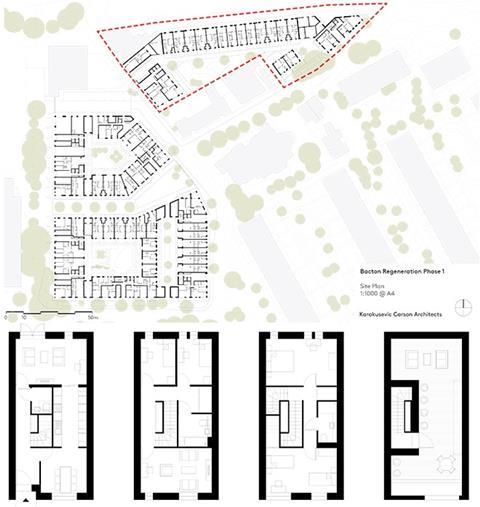 Top: The area within the red dashes is the completed phase 1 – the entire estate is due to be completed by 2017, creating 294 homes in total Bottom: Floorplans of a typical four-storey townhouse

Phase 1 includes 67 homes with three blocks arranged in a splayed formation around a triangular courtyard. Within the courtyard is the children’s play area the residents requested, now safely and directly overlooked by homes.

All three blocks are clad in brickwork flecked with grey and beige to pick up the archetypal London stock brick and the brickwork of the adjacent grade I listed St Michael’s Church. The roofscape is animated with a series of asymmetrical pitches, merging well into the local traditional townscape and dynamically avoiding the flat roofs so loathed by the residents.

Crucially, the buildings create a hard new street edge colonising the anonymous no-man’s land that is a classic feature of the 1960s housing estate with a more legible boundary presence of railings, defensible space and clearly defined entrances. Openings are treated as punched voids against the solid forms, with facades interspersed with a series of generously projecting balconies.

Internally, the units are spacious and well lit with an inventive combination of layout options providing flexibility between open-plan and more segregated living spaces. Undoubtedly the most striking features are the generous roof terraces, lavishly finished in oiled timber decking and exquisite Guzzini light brackets, a feature the design team readily admit to “fighting” for.

Clearly, the roof terraces are incorporated to provide the amenity space lost because the townhouses back onto railway tracks. Nonetheless, they speak of a level of generosity and ingenuity that is remarkable for a social housing scheme. Karakusevic Carson Architects describe Bacton Low Rise as “simple and rational with deep reveals and a strong street presence” and this is indeed what it is – a handsome contemporary extension of the London mansion block typology that utterly transforms and enhances the urban experience of a once-blighted urban site.

More so than this, Bacton Low Rise is a demonstration of community activism. It proves first and foremost how regeneration is as much about community as it is construction and it also provides a compelling demonstration of the wider benefits that can flow when the consultation process views the local community as an asset rather than a risk.