On the Soho spot that was once the Raymond Revuebar, its former proprietor’s granddaughter decided to build a theatre – the challenge was how to fit into such a tiny space a venue flexible enough to be financially viable. Thomas Lane finds out how Charcoalblue and Soda Studio cracked the problem 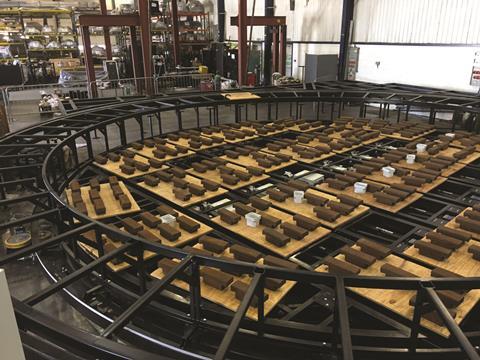 The stalls-level revolving section under test, with blocks to simulate the weight of the audience

A single press on a button on a control panel is all it takes to start the process of turning the auditorium in Soho’s new Boulevard Theatre from a nightclub into a fashion show venue. Press the button again and the catwalk morphs into a theatre ready for a performance. The space can also be transformed into a venue for conferences, live music, presentations and film screenings.

The technology behind this chameleon-like space is believed to be a world first. The theatre features a revolving auditorium with a floor that can be configured to accommodate a range of options, including completely flat for a cabaret, tiered for a theatre performance or traverse for a catwalk. The auditorium includes balcony seating that revolves to suit the specific use too. The various configurations are pre-programmed, making changing the space for different functions straightforward. The lighting is also pre-programmed to automatically change direction, colour and intensity depending on the auditorium configuration.

It’s a commercial theatre so there is no funding, so it has to pay its way. Which is why it has to transform quickly to provide as many opportunities as possible

The reason the theatre has been designed to push the boundaries of flexibility is its diminutive size – just 12.3m by 11.5m – which means the venue has to be in constant use in order to stack up financially. As Gary Wright, the principal of turnkey design services at specialist theatre design consultant Charcoalblue, explains: “The brief was it had to be a venue that worked really hard as it only has 165 seats. It’s a commercial theatre so there is no funding, so it has to pay its way. Which is why it has to transform quickly to provide as many opportunities as possible.”

Wright says it takes just 30 minutes to completely reconfigure the space, including the seating arrangement. “You could have a presentation in the morning, reconfigure the space over lunch for a conference, in the evening set it up for a theatrical performance, then again late at night for live music.” 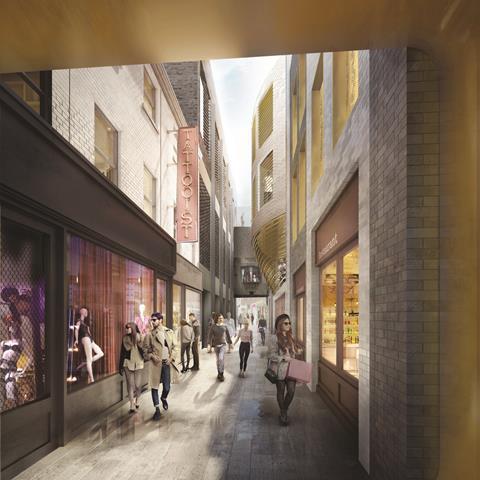 The view down Walker’s Court, showing the theatre’s overhang needed to fit the circular auditorium into the building

The theatre is located in Walker’s Court, once the heart of the Soho sex industry but now in decline. The theatre occupies the site of the former Raymond Revuebar and is part of the changing face of the area. The theatre is being developed by Soho Estates, the company created by the late nightclub owner and publisher Paul Raymond. His granddaughter, and director of Soho Estates, Fawn James, is keen on theatre and saw this as an opportunity to add one to the Soho Estates portfolio – particularly as a theatre called the Boulevard, operated by Raymond, once occupied part of the site.

The challenge was how to shoehorn a venue with the flexibility the business model required into such a small site. Wright says the team tried to get the multifarious functions to work within a fixed format but felt each permutation was a compromise. But then, he explains, “We had the wild-card idea of ‘what if we could turn it [the auditorium] round?’. It seemed outlandish at first, but the more we thought about it the more it made sense.”

There was a problem, though: the building wasn’t big enough for a revolving auditorium. “We ruled it out early on because it didn’t even fit into the site,” says Russell Potter, the director of Soda Studio, the architect on the project. But then Soda proposed encroaching over Walker’s Court at first- and second-floor level, with an overhanging element to enable the revolving auditorium to fit in. Fortunately, both the client and Westminster council were receptive to the idea. “It took a leap of faith from the client and the planners as the revolve would have never worked in the original footprint,” explains Potter. The overhang enabled another 50 seats to be fitted in, which made a big difference to the venue’s financial viability. 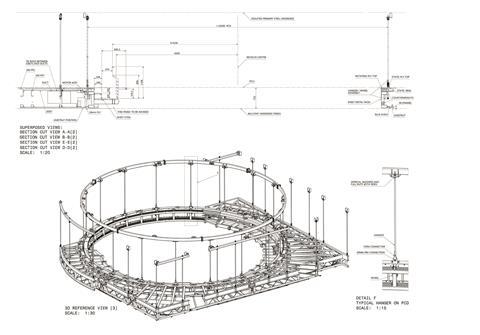 A firm called Tait Stage Technologies was brought in to help develop and build the revolving auditorium. Tait Stage Technologies specialises in live music events for stars including Lady Gaga, U2 and Beyoncé, where dramatic, kinetic stage shows are the norm. “We selected engineering firms who were used to making things move,” Potter says. The revolving floor was relatively straightforward to design and build, as such elements are regularly incorporated into performance venues. But the moving balcony was a first.

The venue has a restaurant and bar below the theatre, making noise transference an issue. However, the building’s intimate nature meant incorporating acoustic buffer spaces between foyer and auditorium was not an option. The solution was to acoustically isolate the auditorium as a box within a box and use drop-down acoustic shutters that move into place to isolate the theatre from the foyer during performances. 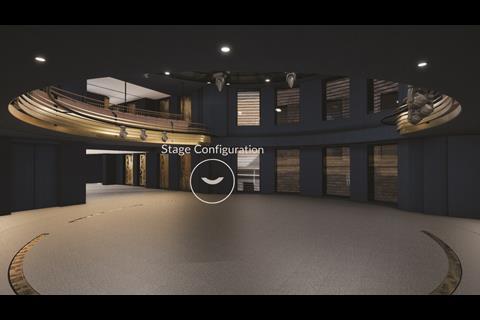 Visualisations showing the configurations for different uses of the auditorium. These are from the top): flat floor; end stage; end stage again; cabaret; in the round; traverse 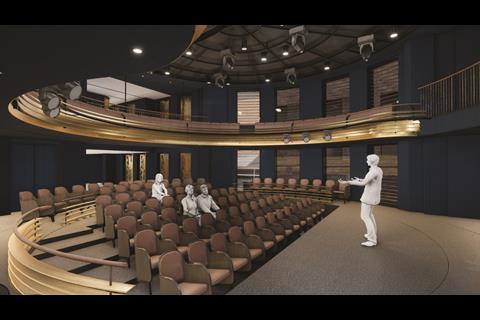 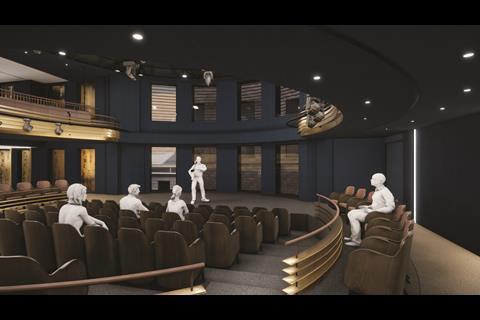 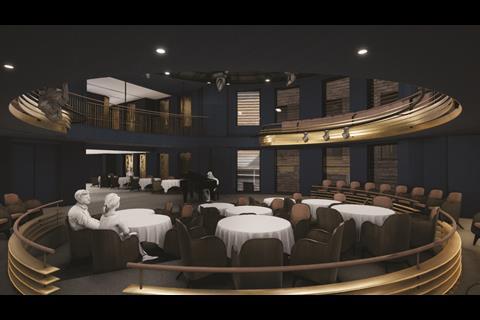 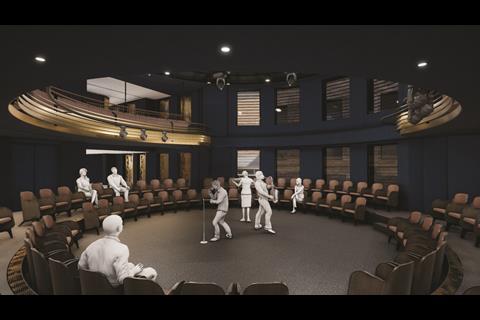 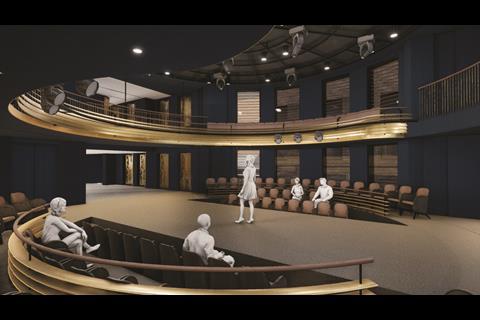 Fitting it all together

The concrete floor of the auditorium is conventionally constructed on columns. Above this concrete slab sits acoustically isolated steelwork that forms the frame for the revolving floor. More than 1m deep, this frame allows the revolving floor area to be lowered below the level of the surrounding fixed floor.

The revolving floor is divided into nine 900mm-wide sections. These can be independently lowered, each to different levels, to create the rake for tiered seating, or alternatively the side sections can be dropped to create a catwalk for a fashion show. The base of the auditorium features a series of metal channels that act as guide rails for sets of powered wheels attached to the moving part of the floor, enabling it to rotate.

The auditorium sides and soffit are suspended from a truss in the roof of the building. Three compression pads are fitted between the auditorium and building frame to prevent the auditorium moving independently from the building structure. The revolving balcony seating is suspended from the roof structure by a series of 30mm-thick steel rods. Two toothed racks encircle the fixed part of the balcony, and the moving element of the balcony features motors driving pinion wheels that engage with the upper and lower rack to drive it and also provide support.

The moving part of the balcony features 36 seats, while another 18 high-level seats with flip-down footrests are located on the fixed section. The balcony is encircled with a guard rail that features removable sections to allow people to access the lower part of the balcony depending on its position.

We also had to integrate the heating and ventilation, which is less flexible than wires 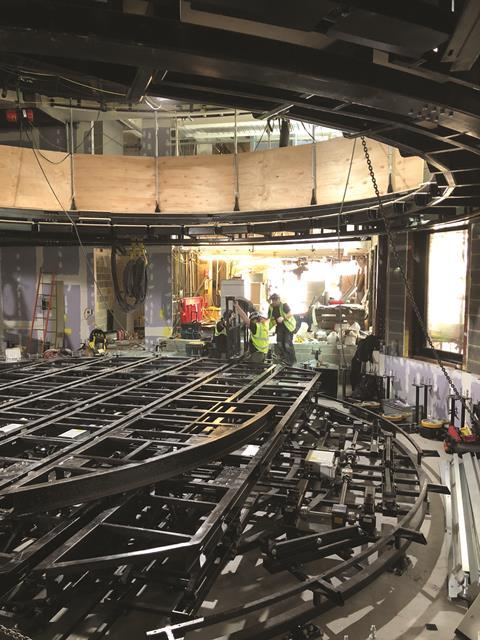 Installation of the revolving stalls structure

Integrating services into the moving upper balcony was challenging as it features perimeter lights that require power and data connections. This was resolved by using a double-length cable capable of taking up the balcony movement. “We also had to integrate the heating and ventilation, which is less flexible than wires,” says Potter. A plenum located in the fixed part of the balcony supplies air through openings that line up with ducts in the moving section which feed conditioned air through grilles behind the seats. A similar arrangement is employed for the downstairs seating.

Although the revolving auditorium is operated by the touch of a button, the Boulevard will employ trained operatives for health and safety reasons. Revolving the auditorium is the easy bit, taking just three minutes. The seats, which Soda Studio had to design from scratch, stack horizontally onto wheeled trolleys that are kept in a handy space spanning over Walker’s Court. It takes 10 minutes to wheel the trolley out, position the seats on the floor and lock these into position. It takes another 10 minutes to configure the upstairs handrails to allow access to the front part of the balcony.

Then the space will be ready to go when it opens in the autumn of this year. 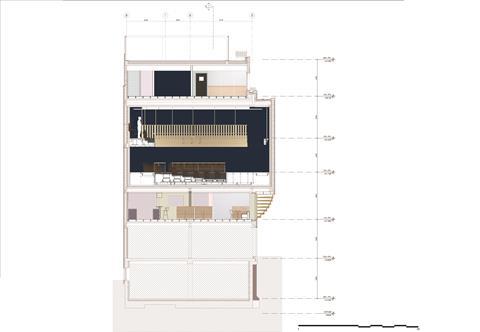