Haworth Tompkins’ new project for the Perse School, Cambridge, is part of a trend towards increasingly professional theatre facilities in schools – and Ike Ijeh finds the Peter Hall Performing Arts Centre to be a particularly virtuoso example 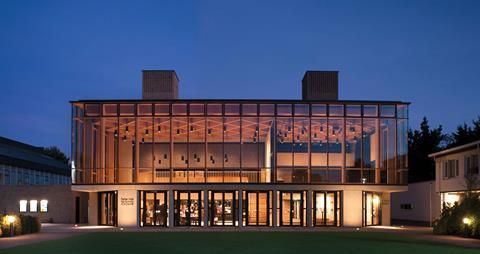 When it comes to theatre design, architect Haworth Tompkins is a seasoned veteran with a number of celebrated projects under its belt. To date the practice has refurbished several showpiece performing arts venues around the country, including the Chichester Festival Theatre, London’s Royal Court Theatre and the Bristol Old Vic. Its work in this sector received national recognition when Haworth Tompkins was nominated for the RIBA Stirling prize in 2007 for its reworking of the Young Vic Theatre and when its stellar overhaul of Liverpool’s Everyman Theatre won the prize seven years later.

However, the practice is less known for designing new-build theatres. This is surely set to change with its latest project: the Peter Hall Performing Arts Centre is a new £9.6m performance space for the Perse School, a 404-year-old independent school in Cambridge. It is named after Sir Peter Hall, the revered theatre director and Royal Shakespeare Company founder who died in 2017 – and who also happens to be a former pupil of the school. Coincidentally, Hall is the longest-serving director of the National Theatre, a building with which Haworth Tompkins has a long association and which the practice renovated completely in 2015. 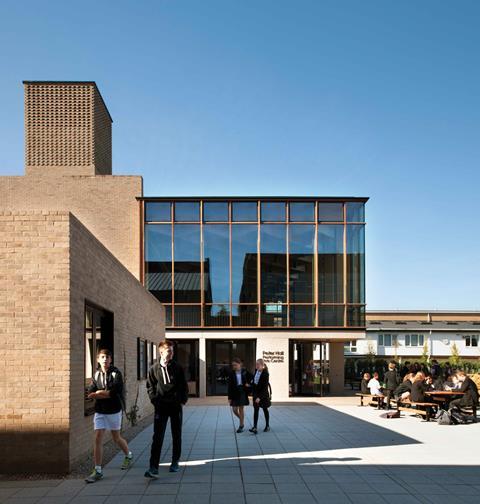 The performance hall is primarily a brick building with a prominent glass, oak and concrete foyer

The new facilities are housed in an elegant glass-fronted pavilion that overlooks a new landscaped courtyard at the heart of the school campus. The campus itself is being revamped under an ambitious masterplan that also includes two new teaching blocks designed by Sheppard Robson. The theatre contains a 400-seat auditorium, an adaptable triple-height foyer space, an exhibition space and a studio gallery as well as full back-of-house facilities. In both technical and visual terms its highlight is arguably the dazzling foyer ceiling: a diagonal grid of wooden beams that seem to float above a continuous glass curtain wall veil, creating a nighttime glow.

The foyer ceiling is inspired by the ceiling of the original assembly hall that previously stood in this spot as the architectural highlight of the campus – which primarily comprises an unassuming collection of 1960s buildings.

With its intricate array of cross-braced timber beams funnelling upwards through a pitched ceiling, the old hall’s ceiling heavily informed the material and structural themes that were to appear in flatter, contemporary form in the new building. 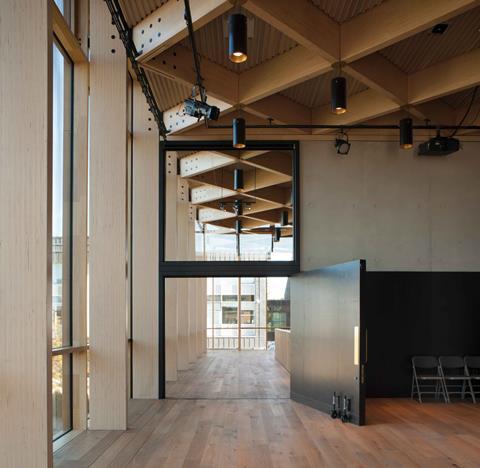 However, the theatre also borrows from a broader palette, typologically at least. It is part of an emerging number of school performance venues that offer a professional standard of facilities on a par with several smaller West End theatres. Crucially, this new breed of school building is also designed to double as a dynamic teaching tool where technical aspects of theatre production, such as lighting and acoustic manipulation, are deliberately exposed in order for the pupils to learn the crafts required off as well as on stage.

While aesthetically the calm, orthogonal proportions of the Peter Hall Performing Arts Centre bear little resemblance to the provocative crouching helmet of the new hall at Le Rosey, internally they have more in common than you might think. Both buildings are primarily naturally ventilated, both make extensive use of wood to underpin their sustainability credentials and both offer auditoriums with windows admitting natural daylight – an unusual feature in the black-box world of theatre.

However, a key difference is that the Peter Hall Performing Arts Centre is far more concerned with anchoring itself within its context and creating a strong visual link between inside and out. Central to this is the glass-fronted foyer and the extraordinary timber ceiling that sails above it.

The ceiling’s distinctive diagrid beams are constructed from a form of structural composite timber known as LVL, or laminated veneer lumber. LVL is a form of glulam in which multiple layers of very thin wood are bonded together with adhesives. Its advantages are that it can withstand higher stresses than conventional glulam and that the build-up of layers allows for a more crafted and textured look, unlike CLT (cross-laminated timber). 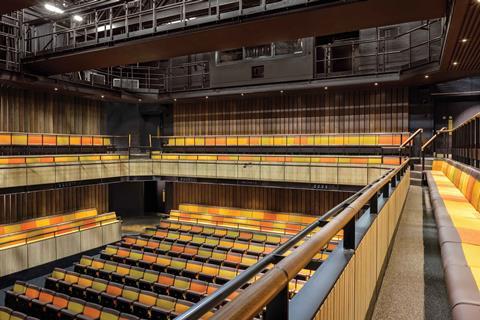 Both these considerations played a role in selecting the LVL beams but, as Haworth Tompkins associate Jessica Daly explains, it was felt important to have wood in order to enable the building to relate to the natural environment outside. “We wanted to use the architecture to display the surrounding natural environment; it’s part of the bond that connects the interior to the exterior.

“Also, as a practice, we’re increasingly interested in working with timber because of the significant environmental advantages it brings,” she adds.

The story of the ceiling does not end with the inventive use of LVL beams: the way in which they are connected is also significant, as Daly explains: “The beams are laid out on a 45º angle grid. However, visually it was very important to us to not make the structure dominant in any one direction. So rather than having a hierarchy of bigger primary beams and smaller secondary ones, each beam section is exactly the same size.” To achieve this, each of the 126 beams only measures the distance between the crossing-point nodes of the diagrid, approximately 1,750mm long. The beams also have a depth of 600mm and are 120mm wide.

To construct the ceiling, a birdcage scaffold was erected below and above it. Each node was fitted with a steel connector that was in turn fixed to one end of the four beams that arrayed out of it in an X-shaped configuration. The beams were secured in place by screws being inserted into the nodes at the bottom and top and being screwed tightly into place. In essence, therefore, the ceiling acts like a giant Meccano frame composed of dozens of individual components bonded together to form a rigid whole.

Along the external wall the ceiling is supported by a series of oak glulam fin columns fixed onto a concrete slab at first-floor level. The fins are slender in size and are connected to the beams above by Y-shaped variations of the octagonal connector nodes used on the remainder of the ceiling. The ceiling beams are also mitred at the perimeter above the columns. This slab at the base of the columns rests on a ground-floor plinth comprising precast concrete columns separated by glazed openings that allow the foyer to spill out onto the courtyard beyond. Externally the plinth is treated to a fascia of exposed aggregate concrete. 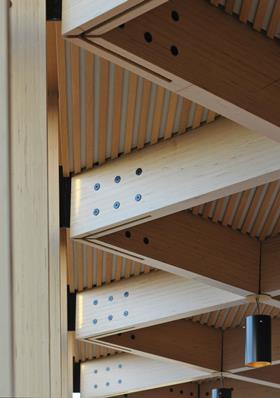 Throughout the foyer and the entire project, a limited palette of robust yet refined materials is used. The wood theme recurs repeatedly, for instance in the entrance space, where it features in the stair and balcony balustrades, in the door architraves and in general fixtures as well as in the simple oak furniture Haworth Tompkins has also designed for the space.

Timber is accompanied by honed concrete walls and exposed brickwork. The same butt brickwork that is laid around the building edge also flows into the foyer to underline the connection between inside and out. Not only does this match brickwork used on the walls but also it is laid in the same double-herringbone pattern visible on the original assembly hall in the 1960s building.

The foyer is just one of three structural elements into which the building can be separated. The timber frame of the foyer contrasts with the concrete frame of the ancillary and back-of-house areas and the steel frame of the auditorium – this last being selected for its ability to span the distances necessary to maintain audience sightlines and maintain a column-free space.

Within the auditorium the wood theme of the foyer is maintained but cast in a darker stain to create a more intimate, atmospheric character. The space is highly flexible: although it incorporates two rows of fixed-bench seating to each side, the stalls seating can accommodate various configurations including a thrust stage and theatre-in-the-round, varying the hall’s capacity between 300 and 400. 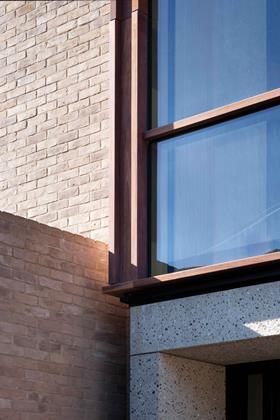 The building makes use of a limited palette of materials including brick, wood and concrete

The auditorium is naturally ventilated through a plenum under the seats, from which air rises to extraction vents at upper levels. These in turn are connected to one of two acoustically attenuated extraction chimneys on the building roof, the other serving the remainder of the building.

Unusually, the auditorium features two low-level windows right at the back of the stage. “They’re fixed with shutters which can be easily closed to provide black-box conditions,” assures Daly, “but we added them in recognition of the fact that this space could accommodate all manner of uses where natural light and an external view might be advantageous, such as teaching and rehearsals.”

The cosy idiosyncrasy of the stage windows is indicative of the palpable sense that the architect is enjoying the liberation of not working within an existing theatre but building a new one from scratch. Daly confirms this: “Yes, it removes one level of constraints but it also sets new ones in terms of considerations like context, structure and materials. These lead to all manner of interesting design challenges and opportunities for which we’ve hopefully found good solutions.”

And arguably, the solution that feels most expressive and prominent to the visitor is the way the theatre foyer anchors itself to the courtyard through its elegant glass and oak veil. The contorting ribs of the ceiling provide a clear and robust technical response to the need to embed the building in its natural courtyard setting. Appropriately, it is at night when this performance comes most theatrically to life, when internal lighting enables the glass to dissolve away and allows the ceiling, bathed in its warm earthy glow, to take centre stage.