Building utopia? How Dudley College was built using a new form of procurement

When Dudley College wanted to build a £10m Centre for Advanced Building Technologies, it plumped for a new form of procurement – an insurance model that benefits the whole supply chain and covers cost overruns. Thomas Lane reports on how the trial project, shortlisted for this year’s Building Awards project of the year category, worked out 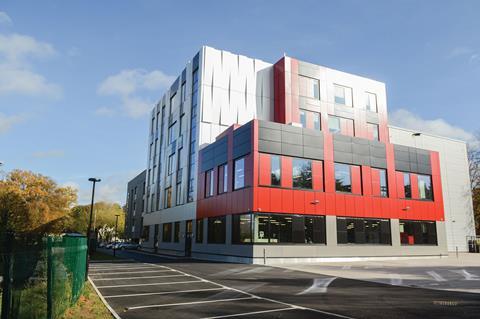 Imagine a world where clients could procure a building knowing it wasn’t going to go over budget, and the contractor wasn’t going to lose money building it. In this joyful, sun-kissed land, designers, contractors and specialist contractors work collaboratively, generating innovative, clever new ideas and get paid handsomely for their time. Meanwhile, construction lawyers are reduced to begging on the streets.

This fantasy isn’t as far-fetched as it sounds. A new form of procurement aims to break the impasse of wafer-thin margins, a culture of dumping risk onto the next person along the supply chain, stifling innovation and a poor quality product. Called integrated project insurance (IPI), this fresh approach has benefits for the whole supply chain and the early indications are that it is catching on.

IPI offers much more than the dry title suggests. As the name implies, it offers public indemnity insurance for design teams and all-risk insurance for contractors with defects liability. The big plus is that IPI also covers cost overruns, which should be hugely appealing to clients and contractors.

For the Dudley College of Technology, IPI had enough appeal to get it to act as a guinea pig for the Cabinet Office, which is promoting innovative forms of procurement in a bid to cut construction waste. Dudley College had procured five buildings over the past eight years, the last four under design-and-build contracts. “We had good and bad experiences of design and build,” says Steve Johnson, the college executive director of estates and capital projects. “In some cases the quality was good, but in others it wasn’t and there were additional costs and legal action.”

The college wanted to procure a £10m advanced construction skills training facility for 16- to 18‑year-olds to act as a demonstrator of advanced construction. Dudley decided to build up a £1m contingency fund in case the job went over budget. Then it was presented with the opportunity to be the first IPI trial project.

“IPI gave us a cast-iron guarantee [of cost] so we knew what our liability would be if the job went wrong,” says Johnson. “This gave us the benefit of not having to build up the £1m fund and enabled us to start the job 12 months earlier.”

Project cost overrun liability is limited by a combination of a pain-gain mechanism shared among the client and project team and an insurance policy. In the case of the Dudley College Advance II Alliance – the name given to the consortium of six key members of the project team – a cost overrun of up to £500,000 on the agreed target build cost of £10m would be shared among the alliance, with overspend in excess of £10.5m picked up by the insurance policy.

The first £500,000 is similar to an insurance excess, but comes with the benefit that any savings up to 7.5% of the budget are shared among the alliance members. The insurance covers a cost overrun of £2.5m, which means the client would only feel the pain if the job bust the £13m barrier. 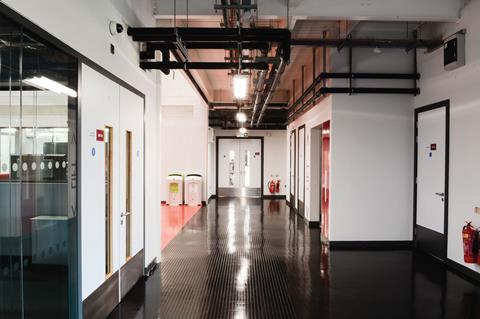 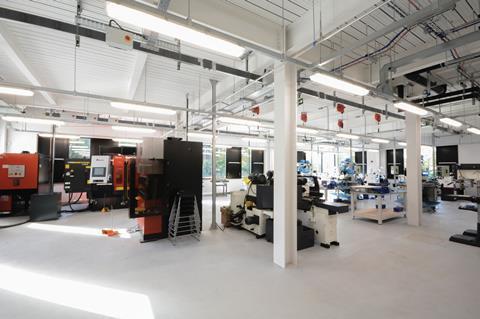 The Dudley College Advance II Alliance comprises Dudley College, Metz Architects, M&E engineer and project co-ordinator Fulcro, structural engineer Pick Everard, constructor Speller Metcalfe and M&E specialist Derry Building Services. There is no contractor or contract in the traditional sense; instead the alliance members work together under an IPI Alliance Contract to define the brief, agree the budget, create the design and construct the building.

A new approach to managing risk

According to Fulcro’s Mike Murray, project co-ordinator at Dudley, project-wide insurance fundamentally changes the project dynamic. “The absence of individual public indemnity, which makes you risk adverse, really enabled us to be innovative,” he says. “Because we are collectively insured it cuts out the waste of producing documents that just transfer the risk. It fundamentally changes the relationship between the consultants and suppliers.”

The alliance works together in a non-hierarchical group to define the strategic brief for the project and how its success will be measured. The client has a total investment target, here £11.68m, which must not be exceeded and the team draws up solutions based on this. Unusually, team members are paid for their time rather than a percentage of their part of the job, which has big impact on the type of solutions that are adopted.

Dudley features natural ventilation, which reduced the amount of HVAC plant in the building (see “How IPI promotes innovation”, right). “It’s counterintuitive for a services engineer to design out ventilation systems as you are being paid a percentage of the value of your work – so reducing your fee,” says Murray. Paying alliance members an hourly rate means they are free to adopt the most cost-effective solutions.

Close involvement with specialist contractors is a key part of alliancing: the Advance II alliance includes an M&E specialist. Early engagement is encouraged to take advantage of specialists’ technical knowledge when working up best value solutions. The aim is to produce solutions that are deliverable for the target cost rather than the traditional approach where consultants work up designs and put these out to tender.

“It’s not in anyone’s interest to exceed the target cost as it affects everybody, not just the contractor,” says project surveyor Scott Parton, Speller Metcalfe’s representative at Dudley.

With traditional procurement, lots of time is spent putting together tender documentation with tenders often exceeding the budget. This leads to designs being “value engineered” to bring costs back in line with the budget, a process that generally compromises quality.

Another benefit of IPI is that shared liability is BIM friendly. “One of the problems with BIM is companies do not want to put data into the model as it’s hellishly difficult to trace who did what,” says Louise Lado-Byrnes of IPI Initiatives, the organisation that developed the IPI model. “With IPI it isn’t an issue as there is a no-blame culture.” Once the design and target cost of £10m was finalised, this was validated by independent technical and financial risk assessors and agreed by the client. Then construction work could begin. Specialists are paid out of a project bank account on the basis of forecasted costs rather than valuations, which benefits the supply chain and eliminates the cost of doing regular valuations. 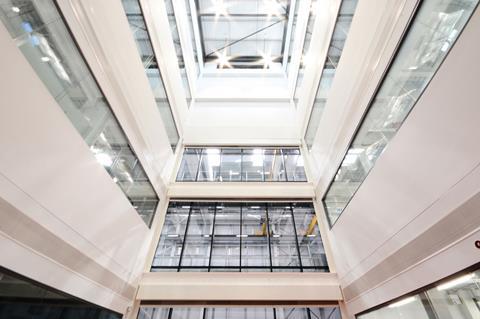 The building features a central atrium. This is part of the natural ventilation strategy, with opening vents in the roof

Advance II completed last September. It was four weeks late but unusually was fully tested before handover – testing is usually squeezed, as this takes place at the end of a contract when the contractor is more concerned about avoiding late handover. Murray says there weren’t any user complaints, which is almost unheard of.

The project came in under the client’s investment target by a healthy 6.5% but exceeded the target build cost by 1.8%. “Although we all picked up a degree of pain, we still all made a profit on this project,” says Parton. “We went further than we needed on the success criteria but it meant the client ended up with a fantastic project.” The project met 99% of the success criteria and exceeded 23% of the targets. The insurance and cost of the independent assessors added up to 4% of the project cost – however, this was of course the first time the approach was used, and IPI Initiatives says the figure is likely to fall to 3% on future projects, once the concept has been proven.

Could IPI work elsewhere? “It lends itself to bigger jobs as a benefit would be greater supply chain engagement with BIM,” says Parton, who points out the relatively modest nature of Advance II meant some of the specialist contractors weren’t familiar with BIM. IPI is already gaining momentum: Speller Metcalfe is working with it on Derby Silk Mill, the conversion of a mill into a museum. Lado-Byrnes says IPI Initiatives is talking to “some very big clients” about using IPI procurement and insurers are more confident about the risks and are prepared to insure jobs with project values of up to £100m.

Would Dudley College do it again? Johnson says the college has just appointed the team to deliver its second IPI project, a £26m transformational technology centre. If the benefits of IPI are enough for Dudley and Speller Metcalfe to get involved again, that suggests it has real benefits. Given the challenges facing the industry, IPI might just be the tonic it needs.

Delivering a low energy building was one of the strategic brief objectives set by the alliance team. Targets included aiming for Passivhaus levels of insulation, an airtight envelope and a low-energy ventilation strategy.

The building is largely naturally ventilated, which is unusual for a building of this nature. It features cladding panels that open on either side of the building, allowing cross ventilation. The opening panels feature window mechanisms, and actuators open these in banks. The panels are manually operated by building users in the daytime and maintenance staff in the evenings when night purging of the building is needed to cool it down.

Murray says the cost of the actuators came out of the M&E allocation, on the grounds people would not open each panel individually, which would make the system less effective. He adds that transferring the allocation would never happen on a conventionally procured building. The heating system was tested by heating the building up to 27ºC. Then the panels were opened to cool the building down. The test was a success and the building handed over to the client secure in the knowledge that the heating and cooling system performed as specified.