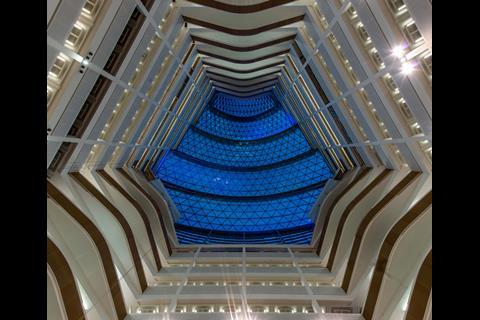 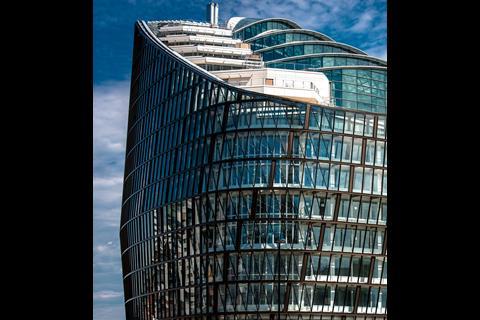 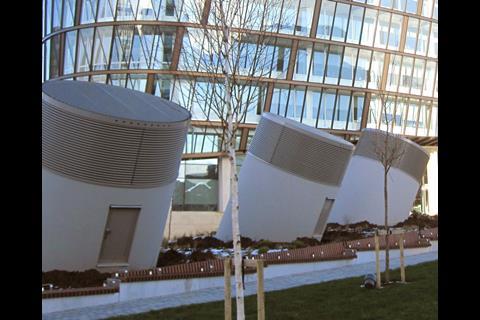 Hidden within its structure and deep underground, concrete has played a central role in turning the Co-op’s new Manchester HQ into the UK’s greenest office

It might have the highest BREEAM rating of any office building in the UK, but the Co-operative Group’s new head office in Manchester wears its eco credentials lightly. With its dramatic lozenge shape and imposing play of steel, concrete and glass, it is every inch the prestige corporate HQ. The facade is adorned with twisting white columns and a bronze-anodised glazing frame, while the interior boasts a stunning atrium rising the full height of its 15 floors. This is statement architecture, designed to project a sleek and go-ahead image for its client.

It is all a very far cry from the kind of driftwood-and-windmill look that sometimes accompanies the very highest levels of energy efficiency. So how has this new 50,000m2 Manchester landmark managed to environmentally outperform every other office block in the land?

Mike Hitchmough, head of offices at architect 3DReid, explains: “What we realised early on was that if you go for BREEAM ‘outstanding’, there’s no half-way house. Energy planning has to be fundamental to the design from the beginning. There’s no way you can do it with add-ons.”

For the Co-op, that meant ensuring from the start that the building would have a great deal of thermal mass to retain heat and iron out inefficiencies caused by diurnal temperature fluctuations. These days, of course, there is nothing too unusual about that, and large amounts of concrete are routinely specified in commercial buildings for just this purpose. What is striking about the Co-op building, though, is the way that concrete has been deployed to achieve the required mass, and the techniques Hitchmough has used to turbo-charge the thermal mass effect. 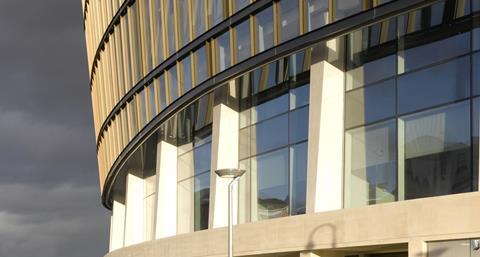 The floor slabs are a hybrid of precast and in-situ concrete on steel beams. These have been created by lowering some 2,000 large precast concrete coffer units, weighing up to 6.5 tonnes each, onto steel beams and then adding a topping of in-situ concrete. Three in-situ slip-formed concrete cores add to the thermal mass, but since these areas of the building are less occupied, it is the coffers that play the biggest role in the heating and cooling strategy. The exposed concrete ceilings provide a huge area of thermal mass to the occupied office space, absorbing heat in summer, and retaining it in winter.

The ceiling makes a further contribution to the building’s BREEAM rating - through the unusual decision to paint it. “The finish that was achieved on the coffers was beautifully smooth and some might think it sacrilege to paint concrete of that quality. But we used two coats of white Kiem Optil mineral paint to increase the amount of light that reflects into the floors from the exterior and from the atrium. That enabled us to save more energy by reducing the lux level of the lighting.”

Energy planning has to be fundamental to the design from the beginning. There’s no way you can do it with add-ons

If the coffers’ thermal mass is central to the design, equally important is the way in which air moves around the building, and perhaps the Co-op’s most unusual energy-saving devices are the enormous subterranean earth tubes used to temper air brought in to ventilate the building. There are three main tubes, 3m in diameter, running from precast intake “chimneys”. These are situated at ground level some distance from the building (see box, overleaf). Formed from in-situ concrete, the tunnels suck air deep below the basement levels before releasing it up vertical shafts for distribution throughout the building.

“Since the temperature down there is a fairly constant 12ºC, this heats the air in winter and cools it in summer,” says Hitchmough, adding that the natural stack effect of the atrium helps spread this tempering effect. “The whole building is naturally ventilated - just not through windows. To make it even more efficient we have placed heat exchangers at the top of the building to extract any spare warmth and send it back down the system.”

As you might expect from a building with the rare accolade of a BREEAM “outstanding” rating, the Co-op HQ has many other environmental features to admire. Such heating as is required is provided by a cogeneration CHP biofuel boiler that runs on oil from rapeseed grown on the Co-op’s farms, as well as waste cooking oil. A double-skin glazing system adds extra insulation, and the lighting is LED. But Hitchmough says that passive measures such as the earth tubes and high thermal mass form the bedrock of the design. “Our approach was that active measures would only kick in as a last resort - so, for example, the chilled beams that are attached to the coffered ceiling units only start up when the concrete is saturated with warmth. And in winter, because the air is pre-warmed by the earth tubes, heating should be kept to a minimum.”

How long the Co-op’s HQ retains its crown as the BREEAM king of office buildings remains to be seen: one imagines that its usurpers are already beyond the drawing-board stage. But whatever look they go for, it seems increasingly likely that the design will include a substantial concrete element, and you would not bet against earth tubes becoming a more regular feature of 21st-century commercial development.

How the coffers were made 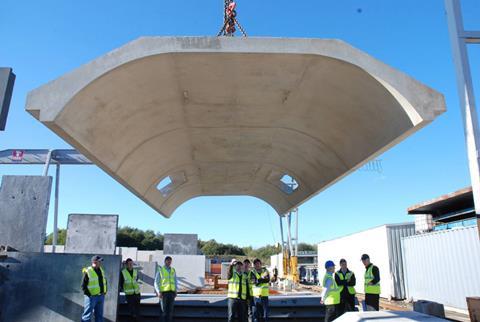 Thorp Precast manufactured some 2,000 concrete coffer units for the Co-op building, stockpiling around half of these before the first was installed to facilitate speedy construction on site. “We fitted an average of about 18 units a day,” says Chris Jones, contracts director of Thorp Precast. “We had about 20-odd mould types, with the largest being 6m long, 3m wide and weighing 6.5 tonnes. We could have made them larger, but we were limited by the loading capacity of the site’s three tower cranes.”

The coffers were made from standard grey, self-compacting concrete using steel moulds. “The units have a smooth, ex-mould finish. We chose steel moulds mainly because of the large amount of coffers we needed to make from each one. With a contract this size, timber or GRP moulds would have needed frequent refurbishing.”

Most of the coffers had a standard radius, and many were also of standard lengths. “The variation came around the perimeter, where more special shapes were required,” says Jones. Thorp reduced the number of moulds needed by designing them with moveable end shutters to allow for changes in length.

“The design also called for false joint lines to make the ceiling look even more regularly modular than it was,” adds Jones. “As we were using steel moulds we decided to use magnetic formers to create these. We part-filled real joints on site to make them look like the false ones.”

Installing the coffers was tricky, as they had to be lowered at an angle through up to three floors of completed steelwork. “We created a mock-up of the frame in our yard so we could test the process to ensure we could do it safely and quickly. As well as allowing us to fine-tune the installation process, this also helped the engineers to test deflection on the beams.”

The test helped the contract to progress well on site - Thorp following steelworkers and followed itself by PC Harrington, which added the in-situ topping above the coffer units. Each trade worked on a third of the building, constructing three floors before moving on to the next level. In this way the trades spiralled up the building like the thread of a screw. “It sounds complicated but it worked very well, enabling us to finish the contract two weeks early,” says Jones.

Some careful engineering judgments were involved in the construction of the new Co-op head office. For example, achieving BREEAM “outstanding” calls for a thrifty use of materials to minimise embodied energy values - but creating the large earth tubes beneath the basements involved digging trenches below temporary sheet piles and then pouring concrete over traditional formwork.

“It wasn’t a straightforward calculation,” concedes Kevin Gilsenan, associate director with engineer Buro Happold. “But in the end it was clear that over the life of the building the benefits of the earth tubes far outweigh any extra material usage.”

The kind of tunnels was also an issue: “In the Middle East it is common to force air to take a tortuous route around a complex system of sleeper walls,” says Gilsenan, explaining that this boosts cooling by exposing the air to a greater surface area of concrete. “But when we factored in programme and cost considerations, we decided against smaller complex tunnels and went for large, simple ones. And they are big. You can easily lose a dumper truck in them.” In fact the tunnels can bring in 50,000 litres of air per second, heating or cooling it by up to 4ºC, depending on the differential between internal and external temperatures.

Buro Happold was also closely involved in specifying the precast concrete columns which run around the exterior of the ground floor. Gilsenan explains that supporting columns in the basement are not square in section, but more like blades to facilitate three cars being parked between them. This blade section has to be translated to a squarer one to properly support the composite steel and concrete structure higher up, and it does this by tapering in two directions to give a slightly twisted appearance. “We looked at simple steel stubs in reinforced concrete - but it wasn’t strong enough to carry the forces involved,” he says. “So the connections are actually to a substantial steel section surrounded by reinforced concrete.”

Finally Buro Happold was able to reduce material in the floors by using the compressive strength and mass of the in-situ topping to the coffers to work structurally with the steel frame. “We were spanning up to 16.5m, and in some steel or composite floors you can get vibration at those distances. This approach gives a high-quality, solid feel while still using materials efficiently.”