The Box preserves papers from the time of Sir Francis Drake and sensitively restores an abandoned church, while providing the biggest contemporary arts space in the South-west. Ike Ijeh reports on uniting the old and the new 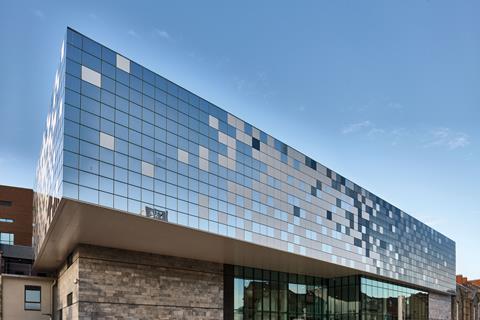 For security and environmental reasons, most state-of-the-art archives storing precious historic and municipal artefacts tend to be discreetly located in basements or in secure offsite facilities. By their nature, the architecture of these buildings tends to be insular and defensive, with the brutalist hulk of the National Archives at Kew or the imposing classical fortress of its US equivalent in Washington both prime examples.

The largest single contemporary art space in the South-west

It is surprising, therefore, to find an important archive facility conspicuously hoisted three storeys into the air on Europe’s largest bi-directional cantilever and encrusted in an undulating pattern of glass panels that makes it look like a pixelated jewel floating above the city. It is even more novel to see this archive facility as the conceptual anchor of a wide-ranging and ambitious cultural renovation project. A grade II-listed church, library and museum have been refurbished, expanded and installed around a new public square at the Box Plymouth.

When the £40m Box Plymouth opens in May, it will be the largest single contemporary art space in the South-west and the region’s biggest arts centre. Its opening will also coincide with the 400th anniversary of the Mayflower’s momentous voyage to the US and recognises Plymouth’s enduring role as Britain’s “Ocean City”.

A museum, gallery and archive in the UK’s Ocean City. The original city museum and art gallery has been transformed and extended to combine the Edwardian building with the former library and St Luke’s Church. An elevated “archive in the sky” houses research and learning facilities plus a public square for concerts, theatre and events.

The new archive is partially cantilevered over the square, unifying the complex

And the final, most physically invasive measure sees an insensitive post-war extension building to the rear of the library and beside the museum demolished to make way for museum entrance, gallery and exhibition spaces. These areas are now situated directly opposite St Luke’s Church on the opposite side of a side road cleared to form a pedestrianised public square.

The new archive sits on top of these museum entrance spaces and is partially cantilevered over the square, unifying the complex. Overall, the development triples the former museum’s size and, fully owned and developed by Plymouth city council, is an ambitious exercise in public sector arts-led regeneration and historic conservation.

From church to gallery

The most historically sensitive part of the Box development was renovating St Luke’s Church. Clad in stucco and built in a Unitarian late-Regency style, the 1828 structure comes complete with Tuscan columns, arched windows and full width pediment, all now beautifully restored. An unusual feature is an external pulpit, which almost seemed to anticipate the new piazza.

While the church survived the catastrophic wartime bombing that damaged or destroyed more than 75,000 buildings in the Plymouth area, it could not withstand the drastic demographic upheavals that followed. Consequently, after Plymouth’s massive post-war rebuilding scheme saw the church’s former parishioners relocated to new communities elsewhere, it was closed and deconsecrated in 1964. The building was used by Plymouth council as library storage and then an office but, by the time construction of The Box began, it had fallen into effective disuse.

Caroline Cozens, strategic projects manager at Plymouth council, described the building’s condition when construction began as ranging from “fair to poor”. While the external walls had weathered reasonably well, the slender cast-iron columns that supported the internal galleries on either side of the former nave were discovered to have virtually no foundations and were extensively underpinned. The external walls were also lined internally with a secondary wall that concealed new servicing and air conditioning equipment and provided a robust support structure for the fixing of installations.

A similar concealed support structure has been built into the roof, which has been heavily reinforced with new steelwork that also supports heavy-load exhibits hung from the ceiling below – 22 hooks have been inserted internally for this purpose. Finally, extensive back-of-house facilities have been installed including new service and loading areas. 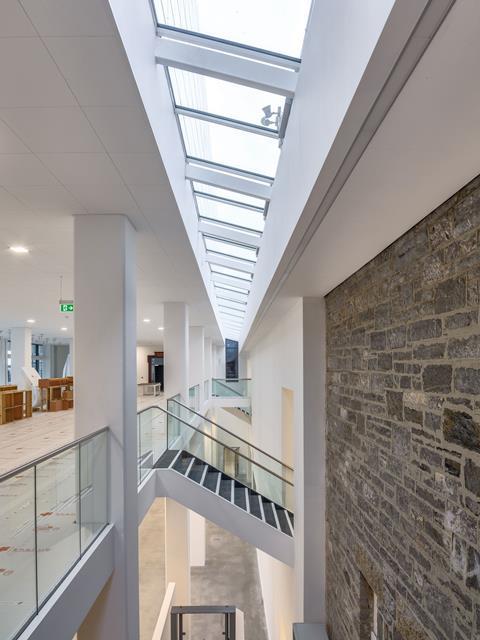 The old and new parts of the development connect

The church now forms a modern, whitewashed exhibition space, which was realised at a standalone cost of £5m. The renovations have made the venue GIS-compliant (Government Indemnity Scheme), which means it meets various government standards of security, vibration, temperature and humidity that enable its exhibits to be commercially insured. This is a crucial accreditation without which many smaller regional galleries would not be able to survive financially. Although surviving original decorative features such as the gallery columns and ceiling mouldings have been retained where possible, its original chancel window has been replaced by a distinctive stained glass installation that created by international glass artist Leonor Antunes.

Signed off by Elizabeth I

Across the finely landscaped piazza, the new double-height museum entrance stands behind a glass curtain wall set beneath the cantilevered box. The dramatically realised open-plan space features a series of columns, skylights, balconies and shifting levels, which enable it to be almost seamlessly integrated to its Edwardian host block to its side and rear.

The foyer’s most dramatic feature is the extraordinary collection of 14 historic Royal Navy ship figureheads suspended from the ceiling. Previously kept at the Royal Navy’s naval base at Devonport and rarely seen by the public, some of these brightly-coloured sculptures span several metres and weigh more than two tonnes. The ability to hang them from the ceiling was only achieved by incorporating their supports into the structural frame of the archive box above. 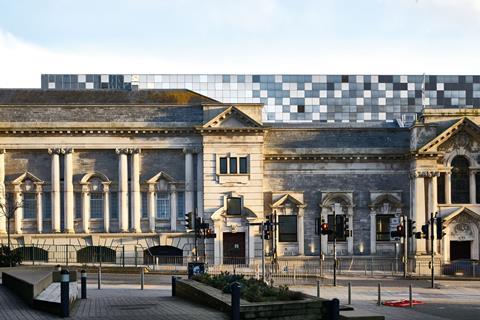 Before the box is reached, further gallery and exhibition space is created on a mezzanine level above the entrance hall. This is reached by using staircases located in the historic parts of the building. The circulatory requirement to move between new and old adds a sense of spatial drama and historic continuity that forms a distinctive part of the Box’s character.

But undoubtedly the star of the show in engineering and heritage terms is the archive box at the top of the building. Plymouth council has a collection containing more than 2 million items, ranging from the skis local explorer Robert Scott used during his South Pole expedition to the signed charter from Elizabeth I to Sir Francis Drake, giving him permission to circumnavigate the globe on her behalf. It also contains the South West Film and Television Archive, the largest regional archive of its kind in the UK. 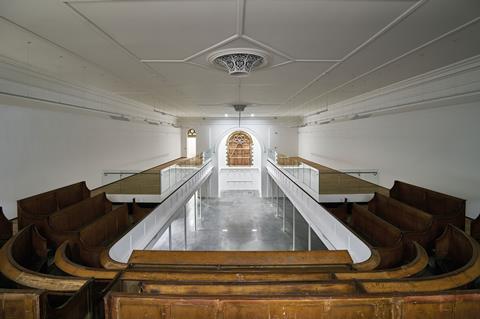 The interior of the restored church

The archive box itself is formed of a 300mm concrete shell supported by the double row of 10m-high square columns that punctuate the entrance foyer below and is split by the mezzanine. Additional column support is provided by another row of columns that hugs the foyer’s curtain wall. However, in order to achieve the area required for the archive, the Box is forced to cantilever out in two directions. A primary 8m cantilever extends from the curtain wall line on the east entrance elevation and a secondary 2m cantilever from the south side elevation. 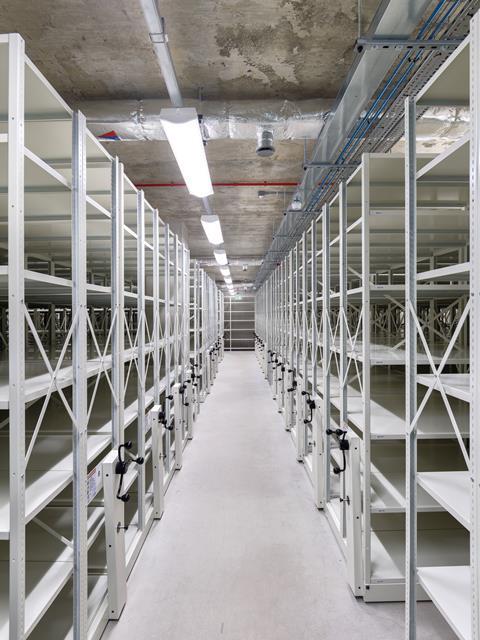 This precipitous double cantilever is supported by beams that extend from the 10m-high support columns that prop up the box. Additionally, at the oversailing corner of the box, the beam arrangement ensures that the shorter secondary cantilever derives support from the longer primary one. Additional stability is provided by the internal cross walls that subdivide the box and the concrete stair cores at either end of the box to the north and south. While the pixelated pattern applied to the Box’s external glass cladding makes a rather jarring contribution to local townscape and adjacent historic fabric, it is certainly useful in ensuring that the new development makes a strong visual statement.

So, when archive facilities are normally underground or offsite, why go to the trouble of doing the opposite and placing it right above new and existing buildings? As Cozens explains, the reason is not only to do with the pride Plymouth has for its seafaring heritage but also neatly summarises the conceptual motivation behind the entire Box project. 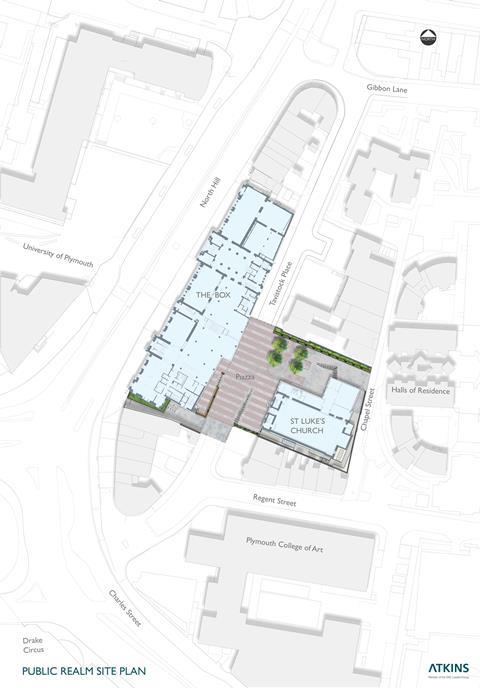 “We’re proud to have this incredible archive collection but we’re on a constrained city centre site with historic buildings where constructing an archive basement would have been almost impossible,” she says. “Plus, although it receives more credit now, Plymouth’s post-war replanning used to get a lot of criticism and there has been a culture of the city being embarrassed about itself.

“These archives show we have a rich cultural history that we should be proud of, so it’s right we hold them up to the sky for all the city to see.”