One of David Marks’ last projects is a contemplative Cambridge mosque, whose complex timber geometry calls to mind both local college architecture and a grove of trees 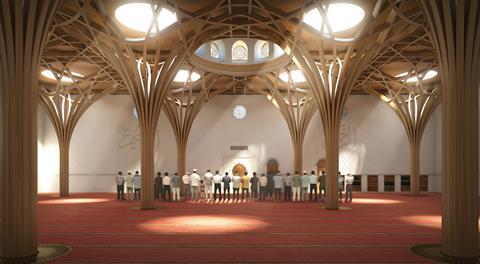 The 8m-high prayer hall has capacity for 1,000 worshippers and features a unique roof structure made from laminated veneer lumber

On a quiet, unprepossessing street on the edge of Cambridge one of the late architect David Marks’ last projects is shaping up, behind a high wall. Designed by his practice Marks Barfield, a spectacular roof structure is under construction; timber elements assembled into eight columns splay out at the top like the branches of a tree, these twist and morph into an elaborate, geometric pattern before joining the branches of the neighbouring columns.

Like all the firms output, the wider practice is involved in the design but this particular project had a particular resonance for Marks. “David was heavily involved in this project as it was particularly important to him,” says Marks Barfield director Gemma Collins.

This highly decorative structure looks like an extravagant use of materials but according to Marks Barfield director Gemma Collins is actually very efficient, embodying Mark’s holistic approach to design. “David was really passionate about structures and really understood these,” she says. “It was important to David that the structure is part of the architecture and the pattern wasn’t just decorative but was part of the building.” The significance of this project for Marks means the pressure is on for Collins. “I personally feel I’ve got to do a really good job for David.”

This building, with all the emotional significance it holds for the practice, is the Cambridge Mosque and will be the first purpose-built example in this rapidly expanding city. Its timber structure is currently being constructed onsite, so Building went to visit to discover more about the reasons for the architect’s elaborate roof structure and how it is being realised by the construction team. 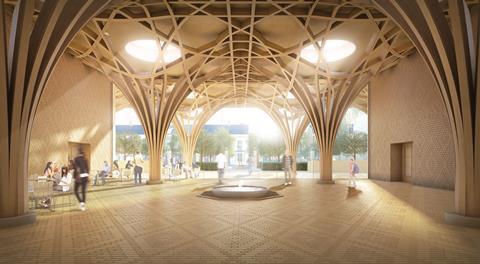 The entrance courtyard features the same structure as the prayer hall

The congregation was literally spilling out of the current facility, a nearby converted chapel, but now the money and a site have been found for a larger, purpose built mosque on an empty site on the long, independent shop-lined Mill Road. Client the Muslim Academic Trust wanted a landmark building and held an international competition, which was won by Marks Barfield in 2007. The £20m building will have capacity for 1,000 worshippers and features an underground car park with space for 80 cars, to minimise the impact on local residents.

The new building follows the layout of mosques around the world. Worshippers will enter into an open entrance courtyard. This space will double up as a cafe to make it more inclusive. Worshippers will pass into a garden, there is a dedicated ablutions area on one side for washing before entering the prayer hall, which is orientated towards Mecca. This includes a dome, a screened-off area for women, and an upstairs mother and baby room with an open screen affording views towards the preacher. 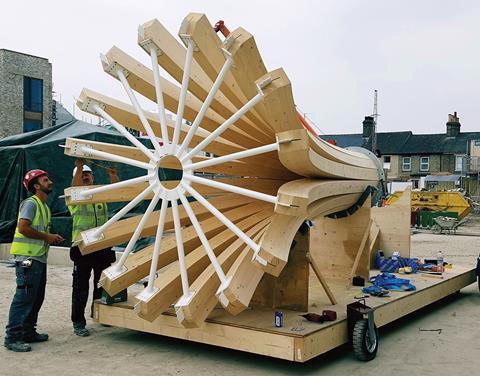 Collins explains this was an opportunity to create a uniquely British take on the mosque. Speaking during design development Marks said, “We didn’t want to create a replica or pastiche of something that existed elsewhere. The opportunity to do something English, British, excited us. Now that there is a significant Muslim community it’s time to work out what it means to have an English mosque.”

This prompted a thorough study of mosques around the world, revealing that mosques are seen as an oasis of calm, like a garden. It also revealed timber is used in a lot of mosques in Africa. Marks took up this idea to create a vision of trees across the site, hence the tree columns. The trees branching out at the top references Gothic fan vaults, with a superlative local example in King’s College Chapel.

Keith Critchlow – Julia Barfield and David Marks’ former tutor at the Architectural Association School of Architecture and expert in Islamic art and geometric design – was commissioned to work on the project. Critchlow has designed patterns for areas of the mosque including inlaid panels for the doors and was also involved in the roof design.

This includes Islamic geometric elements including a traditional octagonal pattern that is pulled out of the flat plane, descending from the roof down to the ground to symbolize the connection between heaven and earth. Collins emphasises the structural efficiency of this design. “Everything in that roof is doing something, you can’t take one piece out.” 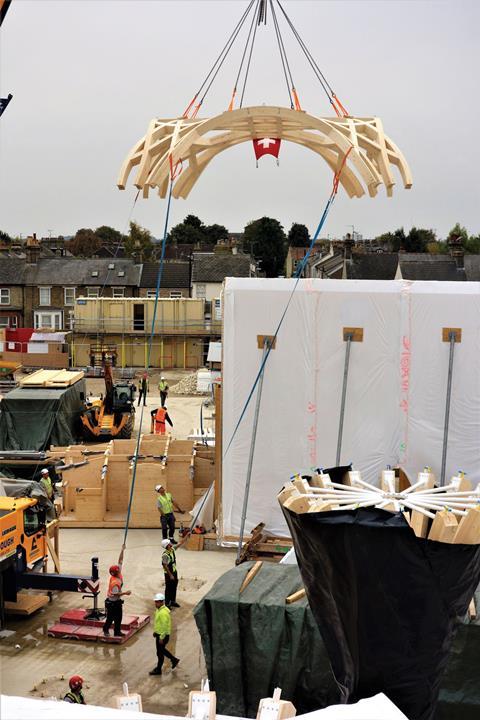 A completed roof crown being craned into position, a process that takes about 15 minutes

Several key elements were needed to deliver such a complex piece of timber engineering. For starters, the procurement route is a traditional contract with contractor design portion. “We fought hard to get this to control the quality and process. You couldn’t have done this with design and build,” explains Collins. Raising the money for the job took some time, which allowed the team to fully develop the design.

Marks Barfield engaged Swiss timber specialist Blumer-Lehmann early on in the process before contractor Gilbert Ash was appointed. Collins says early specialist involvement is normal practice for the firm. “We couldn’t have done this without Blumer-Lehmann as you can’t do it without understanding the material,” she says. According to Collins, the team at Blumer-Lehmann have all done degrees in timber engineering.

The architect worked up the design using software package Rhino and passed the parameters over to Blumer-Lehmann. They did the structural analysis and turned the design into something that could be manufactured and built. Price & Myers is the structural engineer on the job with engineer Smith and Wallwork focusing on the timber elements. 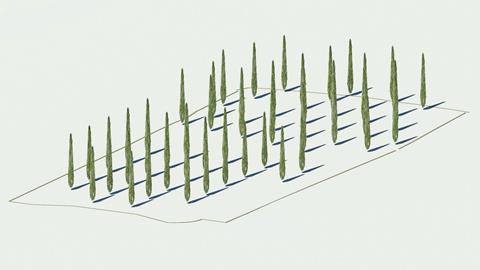 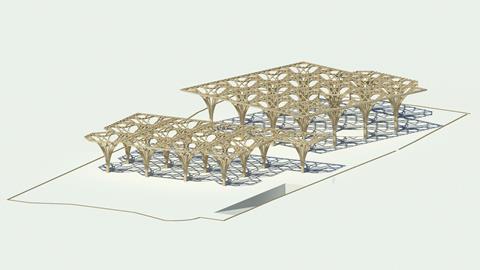 Collins says the UK engineers focused on checking and validating the design, with some of the questions surprising the Swiss. “They are so confident about building with wood,” she says. “We asked a lot of technical questions such as issues with moisture content; they were quite surprised by this. We are still learning a lot about timber construction.”

Blumer-Lehmann used Rhino to develop the design, which was used to make laminated veneer lumber sections of the correct radius. There are three types of section – straight, curved and double-curved. Blumer-Lehmann used a huge milling machine to shape these to the correct dimensions and cut the joints and shape the ends of each section. 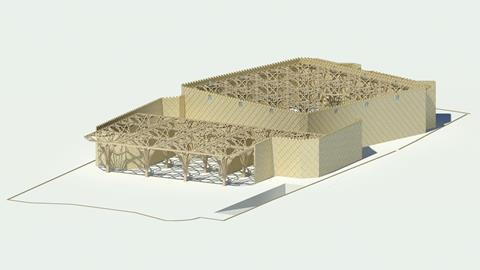 The sections arrive at site from Switzerland, flat-packed in plastic. A covered area in the corner of the site is used to assemble the sections into two types of unit: trees and crowns, the elements between the trees. A special jig is used for each type of unit – for example the trees consist of 16 sections and are built in two halves then joined together. A steel crown is used for the trees to add rigidity and meant the size of the sections could be reduced.

“It’s just like a puzzle, you take the right pieces, bring them together, put in the bolts and that’s it,” Jephtha Schaffner, Blumer-Lehmann’s project manager nonchalantly explains. He adds that it takes a day to assemble the crown and half a day for a tree. A mobile crane lifts the units into position, which are bolted in place, an exercise Collins says takes about 15 minutes.

The timber structure should be finished by the end of this month. The final finish has been carefully planned. The timber is UV treated to stop it going ginger and the walls – made from cross-laminated timber – will be painted white to show the roof and column timber to best advantage. A recess at the top of the wall avoids the awkward interface between wall and roof structure.

The building will be overclad with patterned tiles with the project scheduled for completion in November next year. The finished building should look spectacular and will be a fitting tribute to David Marks and his approach to architecture. 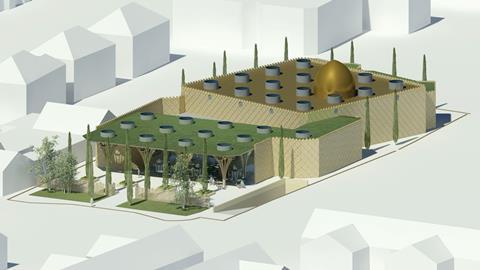